Theresa May’s great gamble looks to be going awry as polls have tightened with Labour pulling almost even from a staggering Tory majority at the time of announcement. Although the reliability of publicly available polls is usually low given underlying assumptions (see here for FT Alphaville’s great exposition), the momentum towards Labour is still breathtaking. Corbyn may be forgiven for having the air of Lenin in 1917.
The election was May’s to lose given the shambolic opposition. However, the general anger against the establishment seems to have turned against her. Corbyn, simply by mouthing platitudes promising socialist utopia, has become an effective channel for this anger. Moreover, the toxic legacy of Cameron and Osborne’s austerity is now being hung like an albatross around May’s neck as police and public service cuts have become an issue in the aftermath of terror events. Whether she falls is going to be mainly decided by Scotland and the youth vote. If the anti-Tory vote tactically swings en-masse towards Labour from SNP, Corbyn has a chance. Together with the millennial / under 35 vote, which has shown itself to be more susceptible to Corbyn’s snake oil, it may push him into Number 10 on the the 9th (the massive voter registration amongst the 18-24 year olds does point to a Corbyn surge).
For a trader, given all the uncertainty, shorting Gilts seems to offer good risk-reward. If Corbyn wins, Gilts are likely to sink as investors re-rate the risk premium for a potential Venezuela-of-the-West. A May win is not going to make Gilts rally much especially given current low 10-year yield of 1%. In fact, yields seem to have already outperformed recently compared to USTs (chart below). Moreover, given the impending nastiness which will be unleashed as Brexit negotiations get underway, the hit to government finances from the slowing economy and continuing inflationary pressures due to Sterling weakness, Gilt yields are likely to rise in the short to medium term from historic lows. Strong and stable, Gilts are not.
(Disclaimer - This is merely my opinion and NOT investing advice. You should do your own analysis before putting on any position) 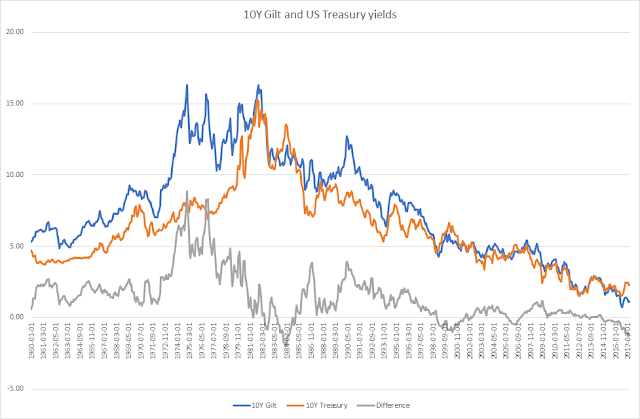 The UK housing market has continued to astound, scaling new heights oblivious to the surrounding economic environment. Brexit notwithstanding, house prices rose to a new peak in December 2016, up 16% above the pre-crisis peak. Unfortunately affordability has continuously declined because household incomes have not risen as quickly and dramatically. In the last decade, median household income rose about 4%. As a result, house price to median income ratio of ~7.75 is at a new high. (Figure 1 below). An example to translate these statistics into the real world: It’ll take a median household approximately 12 years to save for an 80% LTV mortgage assuming it saves an eighth (12.5%) of its income (i.e. more than double the current UK household savings rate of around 6%). 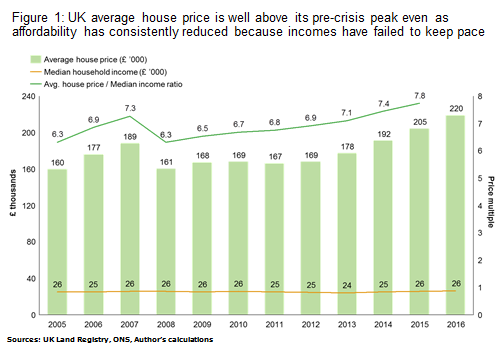 The increase in house prices has been driven by increasing household leverage given that incomes haven’t kept pace. Total net mortgage lending to households has increased by 12% since the crisis to £1.3 trillion (roughly 70% of 2016 GDP). Average lending per household increased 7% and stood at 180% of median income at the end of 2015 (latest available data), which was about 10 percentage points higher than the pre-crisis peak. (Figure 2 below). Fortunately, the resumption of income growth since 2012 has helped reduce the loan to income ratio from its high of 189% in 2012. 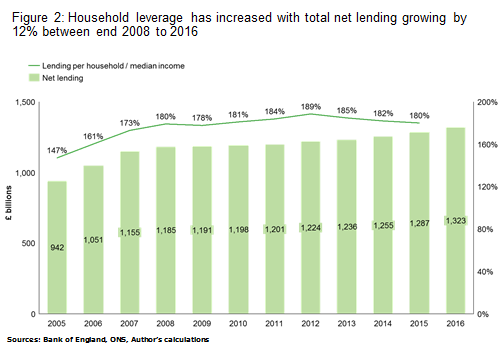 Increased household leverage, which has outpaced increases in income, has only been possible due to rock bottom interest rates. Bank of England cut rates to 0.5% in March 2009 and remained there until the fear of Brexit led to another cut to 0.25% in August 2016. Alongside quantitative easing (QE), this has pushed mortgage rates to the lowest levels ever (or at least from the time BoE has data). (Figure 3 below). 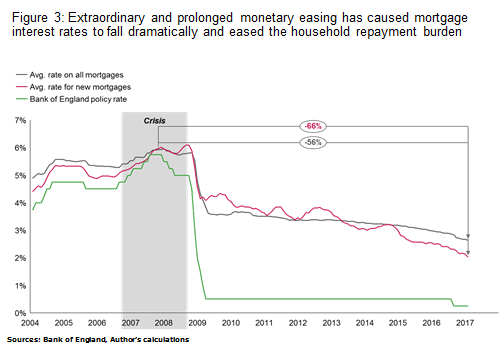 All the elements to make a classic Minsky mix are here, i.e. (non productive) asset price increases based on increasing leverage which is provided on the assumption of further price increases (based on FCA’s data, LTVs for new mortgages have consistently increased since the crisis with a third of loans made in 2016 above 75% LTV compared to only a quarter in the immediate aftermath of the crisis in Q2 2009). Moreover, extraordinary monetary policy has provided temporary stability and ensured that cost of leverage falls even as leverage increases.

However, Brexit is now going to test the seeming invulnerability of the UK housing market. Sterling depreciation (~20% since referendum announcement) has already contributed to inflation with the latest CPI figure edging ever closer to BoE’s 2% target (Figure 4). While the BoE could earlier be safely relied on to shift the inflation goalposts (i.e. confirming Minsky’s regulatory bailout hypothesis), it now faces a dilemma. The Brexit war with EU is likely to be long and acrimonious. During this, any hint of capital flight may require using the conventional defensive measure of rate hikes. Similar to 1991-92 when interest rates were raised to defend the Sterling in the ERM, this is likely to have a devastating effect on mortgagees. For example, raising rates by 1 percentage point now will lead to a 37% increase in mortgage interest costs. Unfortunately standing pat and not raising rates now poses a greater risk of an inflationary squeeze on household incomes. On top of this is the very real possibility of a Brexit-induced slowdown in incomes as job creation slows and some jobs migrate to the EU (potentially in areas such as finance). This implies affordability is set to fall further even if BoE keeps its easy money stance. Moreover, an environment with heightened risks is likely to make banks more circumspect about lending irrespective of low rates (i.e. liquidity trap), putting a brake on leverage-enabled house buying. 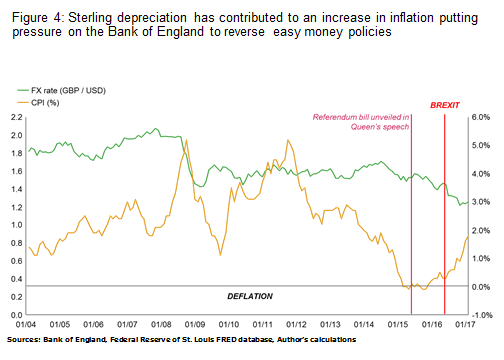 While UK housing’s Minsky moment seems to be at hand, it has been predicted many times before without materialising (mea culpa as well). With the triggering of Article 50 imminent, we will know soon enough whether the UK housing market manages to dodge the Brexit bullet too. Despite the risk of sounding like a perma-bear on UK housing, I believe the denouement is near. Given high valuations and stretched affordability, risk-reward is skewed against being long.
Posted by Shashank Khare at 12:37 No comments: