Thursday's momentous vote in the UK has wrongfooted most investors and has switched "risk off" mode. At this point, the only certainty is that it is going to be a roller-coaster ride for the markets and that it is too early to buy the dip (risk-reward is skewed against buyers).

The "chessboard" below is a quick and initial stab at putting down my thoughts.

The current UK and EU stances favour a risk-off environment with the EU in a dominant negotiating position as the UK invokes article 50 (grey squares in the figure below).

For the UK, the optimal strategy is to not invoke Article 50 for as long as possible and launch an outflanking diplomatic manoeuvre to force real change in EU treaties. This can be done through allying with national leaders in Europe who are fighting anti-EU populist sentiments themselves. However, this is hard and requires a greater degree of competence and leadership than displayed by the UK in the recent past. While Boris Johnson's "no need for haste" veers towards this, a clear "leave" strategy is notable by its absence. It is likely that any new PM invokes article 50, as it is the easiest course to take with the lowest personal political risk (there is also a distinct possibility of a snap election, but invocation of article 50 will still remain the easy choice). Disregarding the referendum is possible and can take many forms, e.g. taking refuge in its "advisory" nature or calling a new one which 3 million petitioners are clamouring for. However, such dodges are unlikely given the British.

For the EU, internal compulsions to deter more "exit-eers" are likely to lead to the desire to set an example of the UK. Mr. Jean-Claude Juncker's comment about not being "an amicable divorce" does not augur well. Ultimately, as in every divorce, the desire for vengeance is likely to be self-defeating. How much of this desire is reflected in their bargaining position will determine the level of acrimony, uncertainty and protractedness of the process. There is a glimmer of hope that national leaders such as Angela Merkel may persuade the European negotiators away from scorched earth tactics. However, at the moment it is not the most likely scenario.


(Please note the disclaimer at bottom - all of this is my personal opinion and should be taken as such. It is likely to change as the situation changes. Nothing here should be considered as an investment recommendation.) 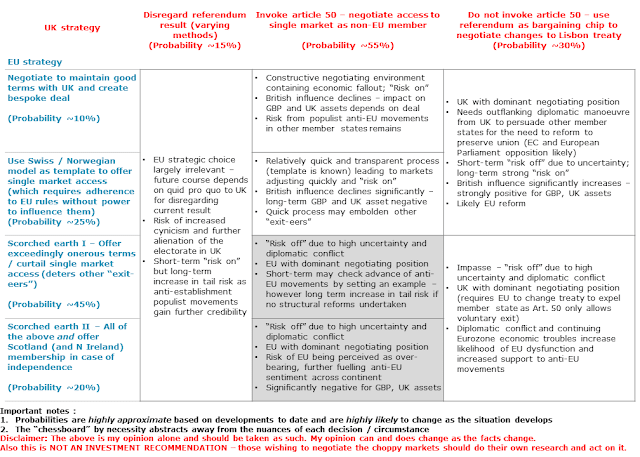 Posted by Shashank Khare at 23:25 No comments: