“Artificial intelligence”, “machine learning” and “robotics” are rapidly rising up the buzzword charts. In finance, while there is rising interest in the new technology, the usual ‘old wine in new bottle’ approach by purveyors has created confusion around the precise definition of these technologies and their applications. What used to be bog-standard automation of standardised manual processes is now “robotics”; any set of predictive algorithms are “machine learning”; the mere ability to parse through natural languages confers “artificial intelligence”. All sound cooler and sell more.


It is easier to look at the inter-related technologies under the umbrella term of artificial intelligence (AI). We can define artificial intelligence to be the ability of a man-made system to act independently in a reasonable manner by processing information available to it.  However, we still need to cut through the marketing hype to understand the technology and its potential.


Even though the boundaries are blurred, independence of action allows us to differentiate between Big / Smart Data and AI. The former pertains to systems which process information to help their operator make decisions. AI systems go one step further by making the decision. Whether the decisions are subject to operator supervision and correction is tangential as this is a function of capability and trust in the system. For example, a natural language processing application which parses through email and chat transcripts to shortlist suspicious conversations for the compliance officer to act upon are part of Big Data. One which flags violations and adjusts to new slang through contextual understanding is AI.


In addition, AI systems can be distinguished from each other by the complexity of input data. This has a direct impact on processing power and complexity. For example, a game ‘bot’ has artificial intelligence and so does a robot which can stack and unstack chosen boxes in a warehouse. However, the former has a limited dataset to process which the latter must process complex visual cues such as configuration of boxes, obstacles on the warehouse floor along with other parameters such as weight of box.


Therefore, the twin dimensions, decision making ability and complexity of input data, allow us to classify different AI applications and create a map of the landscape. This reasonably captures most current applications. However, future development is likely to lead towards a system which displays more broad-based intelligence compared to the current narrowly focused application areas. This suggests a third dimension of broad vs. narrow field of application. Artificial General Intelligence (AGI) which can pass the famous Turing test lies at one end while chess playing AI lies at the other. These three dimensions are represented in the figure below. 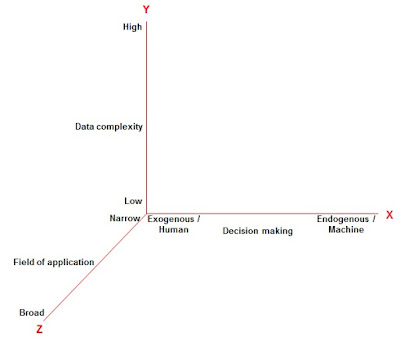 Some of the current application areas can be mapped on this landscape (figure 2). As can be seen, almost all of these are narrow AI. Although some natural language processing (NLP) based applications arguably have a broader field of application e.g. IBM Watson has the potential to function across multiple areas (albeit with training and not simultaneously), AGI systems are non-existent.


Given current interest and investment, it will be interesting to see how the landscape fills out. Posted by Shashank Khare at 21:36 No comments: