I wrote the following article for the April issue of Mint Indulge expressing doubt on the Chinese equity bull run. As markets in Shanghai swoon, the link seems to have gone dead with a 404 error. Happenstance? Coincidence? Or the start of a beautiful conspiracy theory? Anyway, the original article (pre-edited version) given below.

Also, it is quite amusing to note the rhyming of history as Chinese brokerages have come together to stabilise the market by pledging to invest nearly $20 billion. As J.K. Galbraith masterfully details in his epic 'The Great Crash 1929': "Thursday, 24 October...At noon the organized support appeared...determined men were moving in. They were the nation's most powerful financiers. They had not yet been pilloried and maligned...A decision was quickly reached to pool resources to support the market."


The dizzying rally in Shanghai Composite index has sparked much commentary in the financial pages. The index has doubled since the second half of last year generating a 150%+ annualised growth rate for investors lucky enough to have picked the bottom. The rally has also increased the vociferousness of public debate between cheerleaders and sceptics of the Chinese model. The former cite China’s impressive economic growth as the lynchpin of the equity market rally. In addition, they argue that the rally is likely to continue as households, which have hitherto shunned the market, rush to embrace equities. In contrast, the sceptics continue to harbour doubts on the sustainability of the Chinese growth model. To them, the current stock market rally bears all the hallmarks of a bubble. So who is right and more importantly, what investment strategy should you follow?

There is no doubt that Chinese economic growth has been spectacular. Since the start of the century, China has added eight trillion dollars to its GDP. In the process, it has become the second largest economy in the world and generated a vast amount of wealth, both for Chinese nationals and foreigners. Per-capita GDP has grown more than six times from less than $1,000 dollars in 2000 to $6,800 dollars in 2013[1]. Even when compared against other BRIC economies, Chinese growth has been exceptional. From comprising 47% of aggregate BRIC GDP in 2000, China comprised 60% in 2013[2]. Despite the breakneck growth, the stock market only went up slightly more than 50% (Shanghai Composite was 1366 at the start of 2000 and 2116 at the end of 2013[3]). Therefore the argument seems plausible that the current rally is merely the market catching up with economic reality. This is further supported by the fact that in the US, the S&P500 index broadly tracked the increase in GDP of about 60% between 2000 and 2013 by going up 40%.

However, equity represents a claim on future income and sceptics argue that stock prices seem disconnected with future growth outlook. The fruits of past growth have already been distributed. For the stock market to rally now implies that the future is likely to be as rosy. Chinese GDP growth has slowed to 7% and official targets have been revised down again to “around 7%” for 2015 from 7.5% in 2014, which were in turn reduced from the 8% target in place since 2005. Moreover, sceptics argue that the heavy dependence on investment for fast growth has led to a lopsided economy which will constrain future growth[4]. The credit-fuelled, investment-led model is already showing signs of faltering with bank NPLs rising to the highest in 4-years[5]. As the credit cycle turns, equity markets are unlikely to do well.

The second argument in support of the equity market rally is increasing participation by Chinese households as they shift portfolio allocation away from low-yielding bank deposits and a rapidly cooling property market. The argument is credible since before the current rally, equity market participation rates were roughly half of the US[6],[7] and household wealth sitting in bank deposits more than double. Moreover, the property market has cooled substantially with year-on-year change in newly built house prices collapsing from a 7.7% increase in March 2014 to a 6.1% decline in March 2015 (the 7th consecutive month of decline[8]). This has meant that households have moved from property to the stock market to preserve and enhance wealth.

However, the rapid increase in prices certainly seems to have some of the hallmarks of a mania. As the chart shows, Shanghai index is closely following the pattern of the final euphoric rise of the NASDAQ in the second half of 1999. 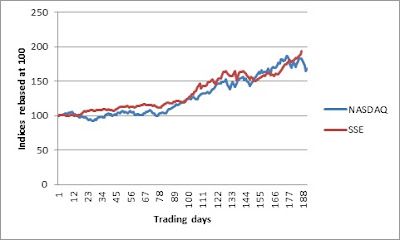 Similar to the dot-com bubble, Chinese stock market analysts are citing that “traditional measures of value have little sway”[9]. The expectation is that the government will not discourage the equity rally in order to support household wealth as the economy slows. Therefore monetary policy will remain supportive. It seems awfully like the Chinese version of the ‘Fed put’.
The evidence strongly indicates that the Chinese equity rally has become a self-feeding spiral with speculators entering in anticipation of a further rise. This is supported by the rush to open new trading accounts and the growth in margin debt, which has increased by RMB 1 trillion (~$160 billion, 1% of GDP) since August 2014 according to BNP Paribas[10].

On balance, the sceptics seem justified in doubting the sustainability of the rally. However, as several investing stalwarts learnt in 1999 and early 2000, betting against a momentum-driven market can be a very unprofitable endeavour. However, riding with the herd is equally foolhardy.
Although largely unplayable, the Chinese equity market offers valuable clues on the larger China story. The rush into stocks is pulling capital away from other areas such as loan and bond markets (traditional wealth management products offered to retail investors were used to channel money into credit markets). This is likely to exacerbate the credit problems which are beginning to surface. Further, the stock market rally, being liquidity fuelled, does not contradict the thesis of slower future growth and economic readjustment. This does not bode well for commodities due to China’s role as the marginal consumer. Therefore prices are likely to stay at current low levels for a while longer. Also, the Yuan is likely to weaken further as Chinese authorities try and manage the slowdown and downturn in the credit cycle through easy money. The fact that the PBOC has already cut rates twice in the last six months strongly suggests this to be the case.
In the final analysis, rather than trying to negotiate strong currents in the equity market, investors may be better off punting in connected markets.