Is Euro the next Yen?


A corollary of Eurozone’s economic woes being compared to Japan is the idea that Euro is the new Yen. Indeed the Euro’s resilience and recent rally seem to indicate that the currency will continue to strengthen despite macroeconomic weakness. Widening Eurozone current account surpluses support this argument.  Just as the Japanese export machine continued to run current account surpluses and contributed to the Yen’s spectacular rise after the bust in 1990, Eurozone’s widening current account surplus supports the argument for Euro’s rise.
However just as Portugal is not Greece; Ireland is not Portugal; Spain is not Portugal, Ireland or Greece; Italy is not part of P,I,G,S and Cyprus is not a template; Eurozone is not Japan. For starters one is a country and the other a voluntary association which assumes that the recent 60 years are historically more representative than the centuries of fratricidal conflict following (and preceding) the collapse of Pax Romana. The social tensions which ensue from an economic crash and prolonged recession are better handled by a cohesive nation than by an amalgamation of nation states. The elite’s political will notwithstanding, the people have the final say (does the name ‘USSR’ ring a bell?).

Even ignoring the inherent political weakness at the heart of the European project, data does not support Euro being the next Yen. First, even though Eurozone’s current account surplus has increased it is nowhere near the level Japan was consistently running post-crash (Graph 1) and which contributed to Yen strengthening. Moreover, there is a limit to which the Eurozone’s current account surplus can increase since it is caused by demand destruction (as I showed earlier) rather than all nations successfully matching German export prowess. 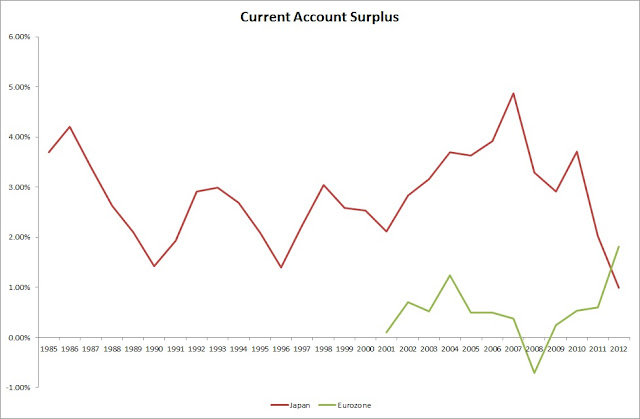 Third, growth is unlikely to ignite given the global economic malaise. At least post-crisis Japan faced a more favourable global growth backdrop allowing it to export and grow. Japanese real GDP growth post-crisis (1991) was better than what the Eurozone is currently experiencing (Graph 2). The latter has to struggle against a slow US recovery and Chinese slowdown. 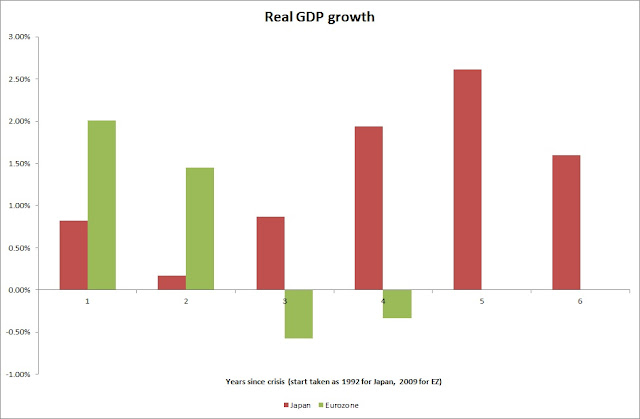 Finally, Eurozone policies are making the situation worse. Japan exploited a favourable growth climate by combining a successful (albeit costly in the long-run) ‘extend and pretend’ financial sector response with fiscal pump priming rather than austerity. This allowed unemployment to stay low (Graph-3). Eurozone on the other hand is forcing internal devaluation on its members. Exploding unemployment is the natural consequence. Instead of the barbarous relic of the gold standard in the 30s, southern Europeans are being ground by the Euro-standard. 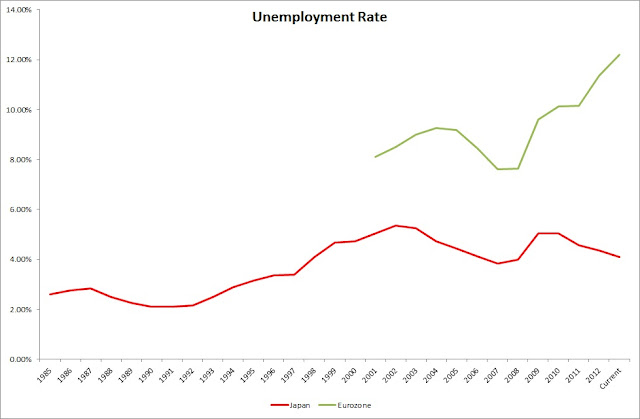 In the final analysis, the Euro is likely to stay supported as long as the current account surplus is meaningful and internal tensions remain contained. But this is an unstable equilibrium unlike the Japanese case. Moreover, the stronger the Euro, the greater the internal devaluation required and stronger the internal stresses. In light of this, belief that the Euro is the next Yen looks misplaced.
Posted by Shashank Khare at 23:13