Over the weekend, the gas which European leaders had managed to pump into markets escaped causing a stink and collapsing their bubble. The three takeaways from the latest “unique” case (it is small wonder that a coherent union is proving difficult since so many unique cases abound):

1. Formalisation of the concept of private sector bail-in

The Cypriot “unique” case furthers the precedent established by other “unique” cases of burning private investors before any administration of state aid. The recent nationalisation of SNS Bank by the Netherlands had already shown that subordinated debt holders were likely to be bailed in. Now the deposit grab in Cyprus shatters the illusion that senior bank debt holders and depositors are safe. A quote from an unnamed ‘senior Eurozone official’ in this FT article, says it all: “If this is successful then it will be used in the future,” said the dejected official, predicting Spanish and Italian banks could face similar levies. “If this is not successful then who cares about Cyprus.”

2. Return of the sovereign-bank feedback loop

Indebted sovereigns caught in the straitjacket of monetary union need debt reduction. This would deliver losses to their banking sector which is already stressed due to either low growth or collapsed property bubble or both. In turn, banks would require state support which cannot be given. Draghi’s empty-OMT was supposed to break this loop by convincing the markets that there was no threat of forcible sovereign debt reduction. It worked for a while but now Cyprus has lifted the veil to reveal unsolved fundamental problems bedevilling Europe.  Graph-1 shows the sovereign bond holdings of Eurozone banks according to the Bruegel database of sovereign bond holdings developed in Merler and Pisani-Ferry (2012). 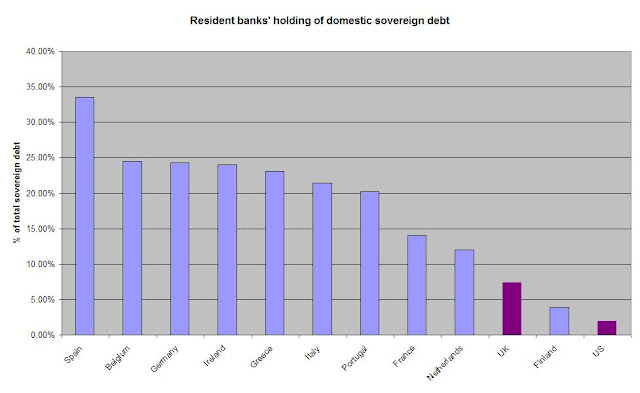 Graph-2 shows the exposure of a country’s banking sector to the general government sector as a percentage of its capital and reserves. This captures holdings of non-domestic sovereign debt and thus better illustrates vulnerability to contagion due to forced debt reduction (the Cypriot banking sector was brought down its exposure to Greece).

Graph 2: Loans and holdings of general government securities as a percentage of capital and reserves 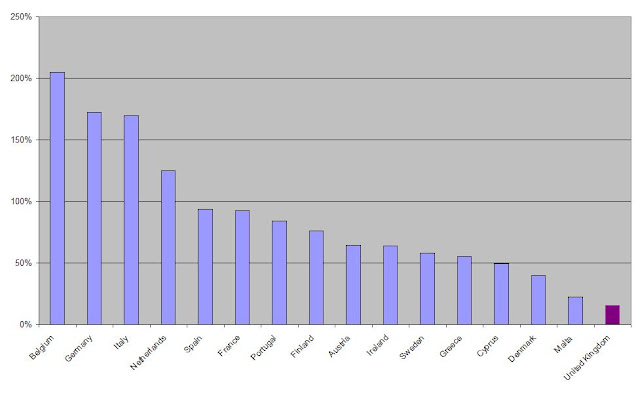 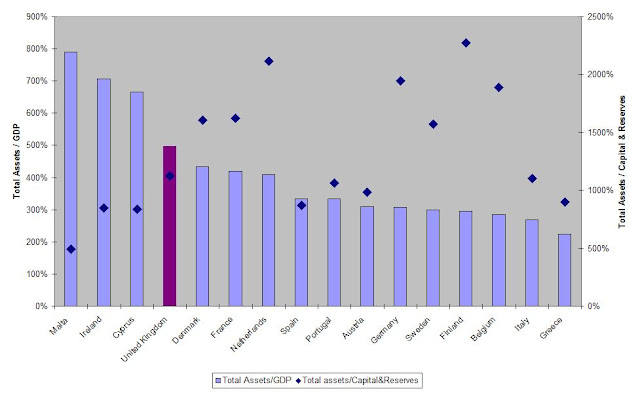 Among the highly indebted countries, Spain and Italy clearly don’t look too good and neither do France and Belgium. It is also interesting to note that the troika of Germany, Netherlands and Finland have three of the most highly levered banking systems. Let’s just hope that their banks haven’t stuffed the books with high yielding garbage.

In Cyprus, an illegal confiscation of private property has been made immune to legal challenge through levying a tax on deposits which is legal and within the power of a government. The tax also circumvents deposit insurance guarantees. This may have ramifications for future debt restructurings. Until now, sovereign debt under foreign law (mainly English law) has been seen to be protected from restructuring and writedown in case of local law changes. However, there is nothing stopping a sovereign nation from taxing interest payments or the return of principal to investors. Unlike hard restructuring/default where there is a breach of contract and thus investors’ case can be admitted in a foreign court (eg. Argentina), taxation is a sovereign right and it is therefore highly unlikely that foreign courts will admit such cases for hearing (unless they can argue that the tax is high enough to be viewed as confiscatory - a legal grey area). Investors holding foreign-law bonds should start reading bond documentation and figuring out their legal position. In the interim it might be a good idea to get some coffee to neutralise the last remnants of hopium from the body.
Posted by Shashank Khare at 15:43