The deleterious effects of the single currency and surrendering sovereignty to Eurocrats are now clear in Cyprus. Broadly its predicament is similar to the one faced by Iceland in 2008 (Graph 1). The dream of becoming a global financial centre is exhilarating but when consciousness dawns all one finds are over-levered banks and a shattered economy. 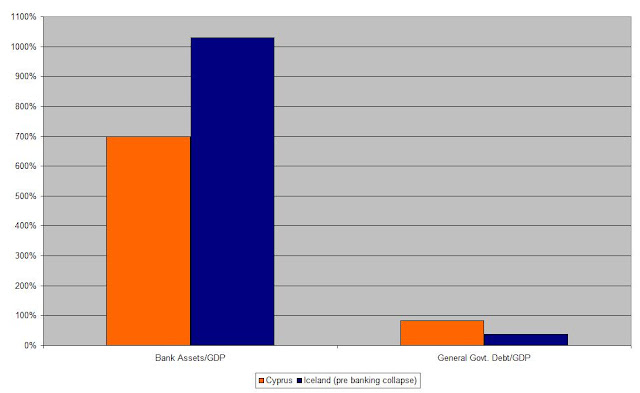 After Lehman’s demise Iceland resorted to the following measures to save itself from the implosion of its banks:

The measures seem to have worked as graph-2 illustrates. 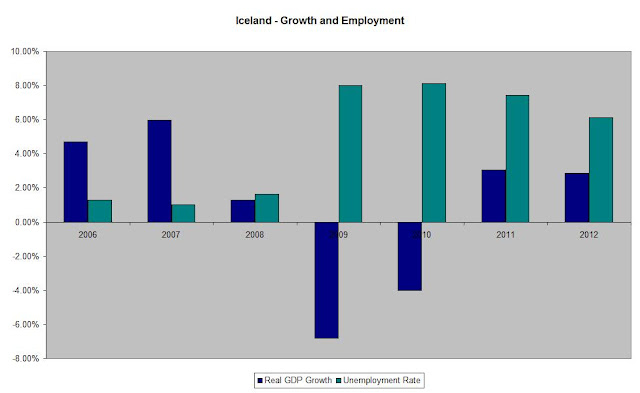 
IMF support ended in August 2011 and Iceland has regained market access. It is projected to have a primary surplus in 2012 and start lowering its debt/GDP ratio (Graph-3). 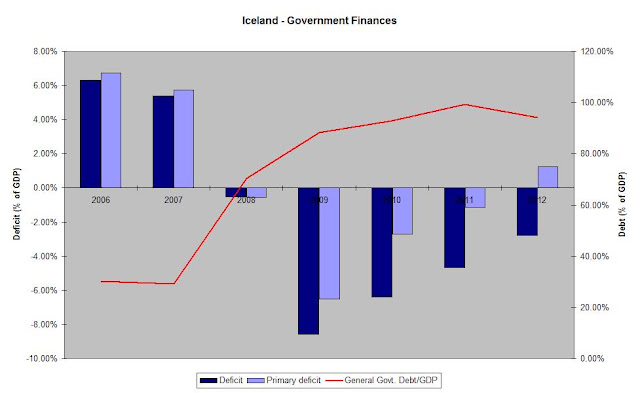 Of course capital controls have still not been lifted but given Iceland’s present trajectory it can only be a matter of time before these stabilisers are also removed.

As Cyprus mulls over the ECB ultimatum it may help to study the Icelandic model. The ill-thought depositor tax and consequent backpedalling and recriminations have probably made it impossible for even a tweaked Plan A to work (Europe doesn’t do Plan B). Even if depositors are not “taxed”, the destruction of trust makes depositor flight almost certain when banks open. Unless the EU/ECB increase their support in anticipation, the current package will not be enough (this shouldn’t come as a surprise given the trend of botched rescues and bigger cheques which started with Greece in 2010). But this seems unlikely given their current intransigence.

Therefore Cyprus can do worse than follow the Icelandic playbook. Unlike the EU inspired one, it avoids grinding austerity without end. Unfortunately this means leaving the Eurozone since the solution calls for capital controls which are prohibited under Article 63 of the Lisbon Treaty (“Within the framework of the provisions set out in this chapter, all restrictions on the movement of capital between Member States and third countries shall be prohibited.”). Moreover exchange rate adjustment which helped Iceland (Krona dropped from 62 to 121 against USD in 2008) cannot be achieved within the Euro.

The problem Cyprus faces is that there is no one offering external aid like the Nordics and IMF did to Iceland helping it avoid default and tiding it over the shock. Russia is the last hope but since the solution involves burning Russian money, help may not be forthcoming. That is unless the Russian government wants to grab some gas reserves and simultaneously teach its oligarchs a lesson in offshoring risks.