As central bankers vow to do whatever it takes and politicians fret about their currency’s strength, I chanced upon a study done by the World Bank on import price elasticities [See footnote for explanation on price elasticity].

Although the authors were looking at trade restrictiveness and consequent welfare losses, their estimates for import elasticities are useful to consider in the context of currency wars. The object in these wars is to induce a depreciation in ones currency against ones main trading partners. This is assumed to lead to lower imports and higher exports, thus achieving a cherished mercantilist goal. Whether such mercantilism is justified is debatable but since ours is not to question why, we should content ourselves in gauging the lay of the land to figure out which armies are advantageously positioned and which are marching towards disaster.

A higher import price elasticity (i.e. a more negative number) implies that a country can reduce its imports more than in proportion to the depreciation it effects in its currency. In addition, if its main exports have high elasticities then it can also increase its exports more than in proportion. The table below gives trade weighted import price elasticities of some countries and the weighted average elasticities of their main export partners. The score is the square of the two elasticities. A higher score indicates a bigger impact of currency depreciation.

Source: Based on the import price elasticities given in Kee, Hiau Looi, Alessandro Nicita, Marcelo Olarreaga, “Import Demand Elasticities and Trade Distortions”, Review of Economic and Statistics, 2008 Vol. 90 No. 4, p666-682 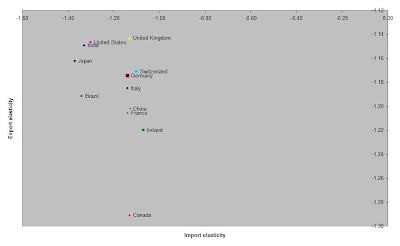 Source: Based on the import price elasticities given in Kee, Hiau Looi, Alessandro Nicita, Marcelo Olarreaga, “Import Demand Elasticities and Trade Distortions”, Review of Economic and Statistics, 2008 Vol. 90 No. 4, p666-682

Looking at data, it is clear that the armies of Abe and Kuroda occupy the high ground which will be to their advantage as their 20% Yen depreciation hits opponents. The Fed is building a fort on USA's elevated territory by pursuing a strategy of import substitution given USA's relatively high import elasticity. Within the Eurozone, the bickering among generals becomes clearer. Since French exports would benefit more if the Euro weakens, France is complaining about an overvalued Euro while Germany is content. It is ironic that Draghi’s bazooka squad has safeguarded German positions more than the exposed periphery. Finally, the futile attempts of British central bank generals to kickstart an export-led recovery are laid bare. The UK has no advantage in pressing on the fight and should re-examine its strategy.

Mercenaries trying to discern which side has the best chance of winning should stick with Abe-Kuroda (although the recent advance has seemingly left their lines overstretched and ripe for retreat). Fortune hunters more eager for the spoils of war than honour can also join the Euro camp and seek to exploit the implosion of its armies.

Caveat: Since an enormous number of assumptions go into calculating elasticities and elasticities are not constant, the numbers above are illustrative only. Moreover export elasticities calculated above do not take into account the differences in product mix (this is not a problem with the import elasticities since they are for the whole country and not just for a few main trading partners). A better method would have been to look at each product’s elasticity and then aggregate based on actual trade data. However this is a blog not an academic journal and as investors we’re only looking for rough ideas to guide us through the smokescreen.