The Economist (The job rich depression) has again brought up the topic of UK’s productivity puzzle. Briefly, what is troubling economists is the fact that unemployment seems to be trending down but GDP is not trending up as expected. Therefore output per worker (productivity) is falling. This is not supposed to happen unless there is a large scale destruction of capital stock (eg. after a war).

One typical response has been to question the calculation of GDP and assume that it is erroneous. Either the entire value of goods and services being produced in the UK is not being calculated correctly or we have moved into some post-modern economy where GDP doesn’t capture all the “valuable” work going on in the economy. The former complaint is valid but the magnitude of the error is not enough to wholly explain the decline in productivity. The latter is pure woolly thinking. If true then the sudden break in productivity trend would imply that the crisis suddenly caused people to re-examine their lives and devote their time to creating and distributing “valuable” work for free.

Another response has been to look at the denominator and state that employment has held up due to labour hoarding. This is based on a survey of private sector employers who said that they have more staff than they need and that they wish to retain their skills base. Prima facie this seems silly as it flies in the face of reason. As the Office of National Statistics (ONS) stated in October last year, “Firms may seek to hold on to labour for a time in the hope that the downturn in activity proves short-lived, but the resulting drain on their finances is unlikely to be endured indefinitely…Labour hoarding may ease the scale of the initial fall in employment, but does not seem consistent with the strong gains in employment seen over the past nine months.” Moreover, as the Economist points out, there was no hoarding of labour in previous recessions despite stronger labour laws.

The unsatisfactory nature of the explanations put forward has contributed to the mystique of the productivity “puzzle”. However, the answer is fairly simple: employment has not grown hence GDP has stagnated. Despite strong headline figures which show unemployment going down, the percentage of people who are employed full-time is at an all-time low (Graph-1). 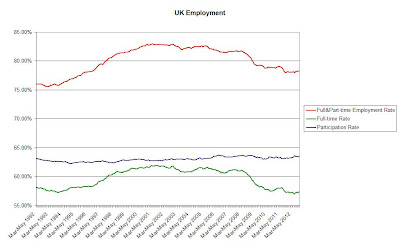 The relationship between the number of full-time employed and GDP is extremely close (Graph-2). The ONS report exploring the productivity puzzle (Patterson. P, The Productivity Conundrum, Explanations and Preliminary Analysis, 16-Oct-12) mentions this fact but fails to explore the implications. 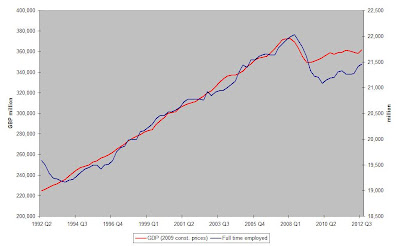 The rise in headline employment is purely due to the increase in the number of self-employed people. But why should they not contribute as much to GDP? First, a large increase in the ranks of the self-employed is due to workers laid off from formal employment. Without access to capital and technology of their employers, their productivity is necessarily going to be lower. For example, a banker who sets himself up as an independent consultant is going to work on lower value deals and earn less. Second, the increase in self-employed has primarily come from the old and to a smaller extent from the very young (Graph-3) who may have lower productivity than people in their prime working years. Moreover, their objective in working may not be maximise earning (hence output) but to utilise free time during retirement. The number of hours worked by those who have become self-employed supports this hypothesis (Graph-4). 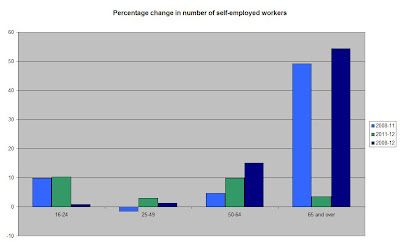 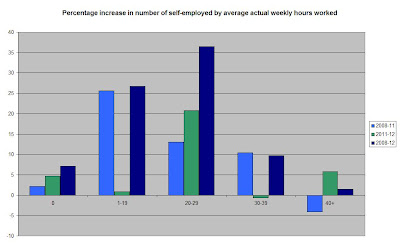 The reduction in full-time jobs is not a problem if workers prefer to have more independence and work lesser hours. However, large increase in the proportion of part-time employed who wish to work full-time (Graph-5) shows that something is amiss. 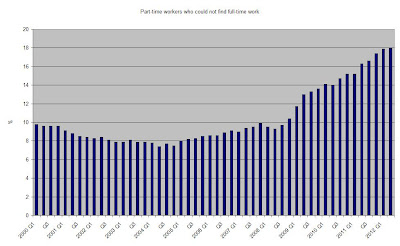 The Economist hints at this when it states that productivity falls for a period when labour and capital move from declining firms and sectors to faster growing sectors and firms. This is part of the creative destruction required for capitalism to thrive but the British economy is unable to carry it out. As the Economist mentions, “More firms are making losses, but they are not being shut down. In part this reflects banks’ willingness…[to keep] dying firms alive to avoid taking a loss themselves. At the same time credit for new firms with better prospects remains tight.” In addition, Bank of England’s policy experiment of rock bottom interest rates enables indebted firms to stay alive by keeping their interest costs artificially lower.

Although the Economist gets the diagnosis right, it descends to quackery in vogue in its prescription. It advocates more of the same credit easing which clearly hasn’t worked and in fact has compounded the problem. Creative destruction cannot be avoided, by seeking to defer it policymakers have only diminished the creative element of the economy and greatly enhanced the eventual destruction to come.
Posted by Shashank Khare at 12:35