I have not been actively tracking sovereign CDS prices due to my being bereft of a Bloomberg terminal. So I was quite surprised to see the run which a friend sent me this morning.

Looking at the steep curves a reduction in near-term default probability is to be expected in light of OMT but that shouldn’t lead to 5v10Y steepening unless the CDS market believes that the European debt crisis has been solved (yet again). Prima facie there seems to be an opportunity to buy default protection cheap – since net shorts under the EU ban are calculated on a duration-adjusted basis, selling 10Y CDS and buying 5Y CDS upto the duration adjusted maximum looks attractive.

However the main problem in betting on default through CDS is the inability to know how CDS will react in the event of default (or near default). As the Greek restructuring and recent SNS Reaal saga make clear, politics not economics is the main driver of returns. Rules can and will be changed to accommodate and perpetuate the pretence of solvency. Moreover all events have to be interpreted by a 15-member committee which is answerable to none and where members may vote depending on their CDS exposure to the credit in question (for example see FT Alphaville’s post on SNS Reaal credit event).

It is no wonder that the CDS market is withering away (See: The Sorry State of the CDS Market which I wrote last October) and sovereign CDS is no exemption (Graph-1 & 2). Perhaps the biggest indicator of sovereign CDS’s demise is the fact that the index, iTraxx SovX, which is supposed to be the most liquid of all, no longer makes it to the list of most traded contracts. Not only has the absolute number of contracts fallen but new activity is almost non-existent as seen by the precipitous fall in open contracts in the two latest series on a rolling basis (Graph-3).

Graph-1: Economic interest through CDS is below the level when the EU-debt crisis started 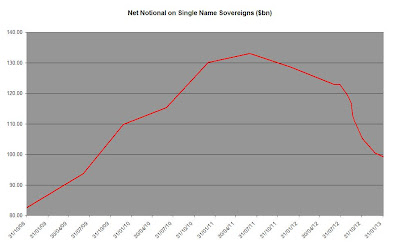 Graph-2: Net notional and contracts in all SovX series are barely above the level at the start of the first series 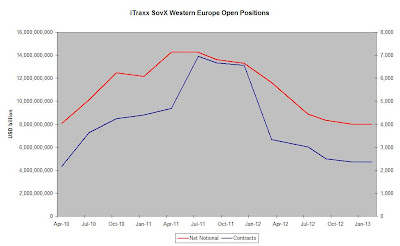 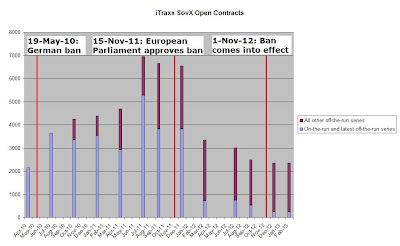 Source: DTCC (Trade Information Warehouse Reports)
Even though the European ban can be surmounted by determined market participants with enough legal finesse, the risk of reputational damage, regulatory uncertainty and legal risk due to contract interpretation have led to an exodus from the sovereign CDS market. Lack of liquidity is self-reinforcing and has led to a thinly traded market which no longer accurately reflects the future view of the broader sovereign market. Therefore sovereign CDS trades now carry very little useful flow information on market sentiment and positioning. The instrument is now marginalised and probably being used more for accounting gimmicks and ‘optical’ hedging than as an asset to express views. The EU should triumphantly unfurl a ‘Mission Accomplished’ banner.
Posted by Shashank Khare at 23:47