Narendra Modi - A Fact Based Look


The mere mention of Narendra Modi sparks off extreme reactions. His supporters idolise him as India’s saviour while his detractors are caught in a time-warp refusing to live beyond their version of the Gujarat riots. To form an informed opinion about the man who has ambitions of leading the country, we need to look beyond the caricatures painted by party hacks and opinion writers and delve into data to analyse his Chief Ministership.


Modi’s political success is not in doubt after his record fourth consecutive term as CM (Oct 2001- Present). However the question which needs answering is whether his electoral success is due to sound administration and economic management or is it based on pure demagoguery and organisational skills of Gujarat’s BJP cadre. Gujarat’s economic performance certainly points to the former. As Graph-1 shows, from the time Modi became CM Gujarat has grown faster than India and increased its share in Indian GDP. Per-capita income has risen to almost one-and-a-half times India’s average versus around parity in 2000-01. Further proof of improved living standards is captured by the massive decline in poverty. The percentage of population living below the poverty line fell faster in Gujarat than India as a whole. In 2004-05 Gujarat had 31.6% of its population living below the poverty line compared to 37.2% for India. By 2009-10 this had fallen to 23% compared to India’s 29.8%1. 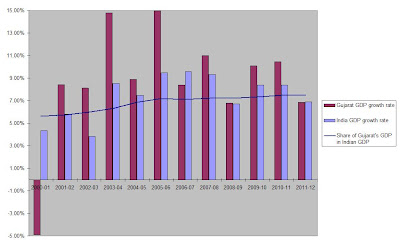 Critics are loath to credit this stellar economic performance to Modi’s stewardship preferring instead to make noises about Gujarat’s inherent dynamism. However as Table-1 shows, they are short on facts and long on rhetoric. Of course Gujaratis are enterprising and Gujarat has been one of the more prosperous states of India but the difference in performance under Modi is too stark to ignore. From a middling performer, Gujarat became one of the top three fastest growing states during 2001-11 and overtook West Bengal to become the 5th largest Indian state by GDP.

Table-1: Striving for the top spot
Source: Ministry of Statistics and Programme Implementation, Author’s calculations
As expected, Gujarat’s infrastructure kept pace with its economic development. In a power hungry nation it maintained its 5th rank in installed state power generation capacity during 2001-112. It ranked the same in road infrastructure as measured by the length of state highways per 100 square kilometres. In addition it has the highest proportion of asphalt roads amongst Indian states at 90.6% of total road length. This is miles ahead of the Indian average of 61.8%3.

Along with bringing greater prosperity to Gujarat, Modi’s supporters also credit him with improving law and order in the state. Once again they are backed by data which shows that crime in Gujarat (total incidence of cognizable crimes under IPC4) increased only 2% over 2006-11 while for the whole of India it increased at an alarming 23.8%. As a result, from being ranked 21st and one of the worst states in terms of cognizable crimes as a percentage of population, Gujarat has become one of the best being ranked 6th in 2011.

However before Modi supporters become too smug, they should take a look at his abysmal record in improving social conditions. Gujarat’s health and social indicators are at odds with its economic development. As Table-2 shows, Modi’s tenure as CM has done little to improve Gujarat’s relative ranking amongst states in stopping female foeticide/infanticide, enhancing literacy levels and reducing infant mortality. The widespread slaughter of girl children as shown by a shockingly skewed sex ratio is a criminal offence and cannot be countenanced by a leader who prides himself on his law and order credentials. As for literacy and infant mortality, it is true that there has been improvement in absolute levels but the pace of change is slow (Table-2).
Table-2: Lagging behind the economic miracle
Source: India census 2001, 2011 (www.censusindia.gov.in), Author’s calculations

Modi’s administration seems to have missed the opportunity for a more substantial improvement. The rise of Asian tigers and China attest to the fact that rapid growth in a modern economy is sustained by a pool of healthy and educated young men and women. Modi’s impressive performance in the economic sphere will be for naught unless social change and health infrastructure follow.

However, it is not Modi’s relative failure in the social and health sphere that his detractors love to cite. Their opinion on Modi fossilised with the Gujarat riots of 2002 and has stood the test of time and facts. Evidence contrary to their world view has been rejected as biased opinion while corroborative evidence has been accepted at face value as fact. Hence the glib dismissal of reports from investigation teams, commissions and court judgements exonerating Modi. Interestingly for a state which they think is governed by a “genocidal religious maniac”, there have been no major communal clashes since 2002. Moreover the number of murders with a communal motive recorded during 2003-10 in Gujarat were lower than Chhattisgarh, Haryana, Madhya Pradesh and Maharashtra according to the National Crime Records Bureau. Also, Karnataka and Uttar Pradesh had the same number of communal murders. Is there a “pogrom” operating across all these Indian states?

Unfortunately for Modi, his detractors are not some fringe conspiracy theorists but powerful shapers of public opinion. They have successfully cloaked him in fascist garb by alleging complicity with genocide and harping on his “dictatorial” style of administration. It is ironic that many such critics obsequiously ignore the wilful and unchecked exercise of power by other Indian leaders. Unaware of their doublethink, they are also perfectly at ease with the quasi-monarchical succession prevalent in Indian politics. Modi’s image problems are magnified because such subjective criticism cannot be conclusively dispelled. Moreover it is impossible to remove his critics extreme confirmation bias through facts and data. The long running 9/11 Truth Movement which believes that WTC attacks were orchestrated by the US government is testament to the power of belief over objective facts.

However as responsible democratic citizens we need to judge Modi’s performance on facts and form our own opinion. On this basis he scores an A in economic management but only a B in law and order as the impressive performance in controlling crime was substantially undone by continued female foeticide/infanticide. This also detracts from his already poor performance in social and health spheres where he scores a below average C-. Although as expected he falls short of the superhuman leader status that his supporters have bestowed on him, his performance has been credible enough to back his ambition to be the leader of the country. Even his strongest detractors would agree that at least there is a performance record and resumé to judge as opposed to a blank sheet with only a name.