The British it seems are truly unlucky in their central bankers. During the tumultuous period following the First World War and into the Great Depression they had Montagu Norman at the helm. He is the unsung hero of all those who fought against the British colonial yoke. By fanatically adhering to the cross of gold he made sure that the economic sinews holding the British Empire atrophied. Shortly before Britain finally went off the gold standard in September 1931, Churchill had this to say about him: “Everyone I meet seems vaguely alarmed that something terrible is going to happen financially…I hope we shall hang Montagu Norman if it does. I will certainly turn King’s evidence against him.”[1] Fortunately for him he was not hanged but reappointed governor in 1931 for another 11 years.

The rhyming of history never stops and some eighty odd years later another financial crisis struck even as the governor of the Bank of England (BoE) believed that the risk to financial stability appeared to be low[2]. The traditional defence for this colossal error of judgement is to lay the blame on Gordon Brown’s door for bifurcating regulatory responsibility between the BoE and the Financial Services Authority (FSA) with the result that neither organisation had their eye on the ball. Even if this is accepted without argument, which it should not be as Chris Giles makes clear in this FT piece – The Court of Sir Mervyn, it is impossible to excuse BoE’s abysmal record of containing inflation.

Source: 'Measuring the real cost of living'; Tullet Prebon Strategy Notes; Issue 43, 20-Feb-13
What makes matters worse is the fact that real inflation has been much higher than the academic kind captured by CPI numbers. This is shown by the table below which has been constructed working along the lines of Dr. Morgan’s report. The result has been to erode the consumer's non-discretionary purchasing power.
Table: Proportion spent on non-discretionary purchases has increased
Note: Share of disposable income is assumed for 2003. Current share calculated based on price inflation and average wage increase. Disposable income is assumed to have increased at the same rate as nominal wages. This ignores direct tax effects.
Source: ONS, Tullet Prebon, Author's calculations

Is it any wonder that retail sales have flatlined since the onset of the crisis? (Graph-2) In fairness other factors such as increase in unemployment and underemployment also play a role in stagnant retail sales. But this leads to the third failure of the BoE. 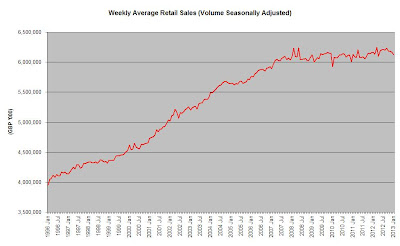 The lacklustre recovery from the crisis and threat of a triple-dip recession shatter the self-constructed image of BoE’s omnipotence. A humbler central bank less steeped in monetary dogma and therefore cognizant of the liquidity trap may be forgiven for being unable to resuscitate the economy especially in the face of an increasingly tight fiscal policy. But the highly intelligent academics inside BoE must also answer this charge of failing to revive the economy despite their repeated and counterproductive attempts at unconventional monetary policy. These attempts which clearly run contrary to their inflation targeting mandate were justified on the assurance that inflation would return to target in the medium-term. In this case the medium-term is certainly taking a long time to materialise.

Just as Montagu Norman valiantly stuck to the then prevalent dogma of the gold standard all those years ago, Sir Mervyn King has steadfastly refused to reconsider QE let alone rein it in. In fact, his parting gift to the nation would have been an enlargement of the QE programme even as there is increasing disquiet about the effect of such “unconventional” monetary policies (as shown by the Fed minutes released yesterday). QE has been a Faustian bargain, not only failing to ensure a sustainable recovery but leading to inflation through debauching the currency. Thankfully the governor’s term is over and hopefully Britain’s luck turns with the new man, Mark Carney. But don't start buying Sterling just yet.
[1] Based on ‘Lords of Finance’ by Liaquat Ahmed, Windmill Books 2010
[2] http://www.ft.com/cms/s/2/f853d068-94b7-11e1-bb0d-00144feab49a.html#axzz1wg5hOORI
Posted by Shashank Khare at 15:29