The post Italian election wobble reminds me of February 2007. Then an unrelated sudden plunge (~9%) in the Shanghai Composite led to a sell-off in risk assets. The sudden jump in credit spreads and the plunge in equity markets caught quite a few by surprise. However the panic soon passed and spreads returned close to their earlier levels (Graph-1 & 2). The equity markets, oblivious to the storm brewing in the US housing market, went on to make new all time highs (Graph-3). 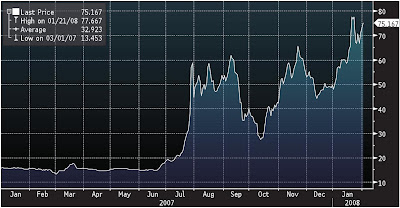 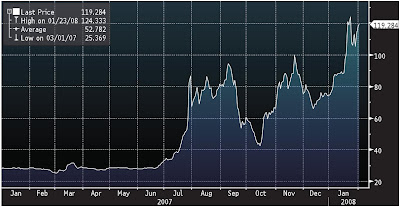 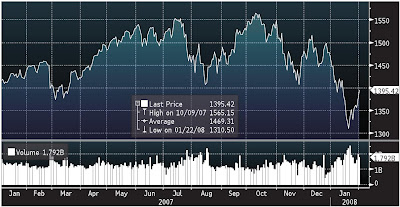 Similarly now a sudden dumping of risk assets was caused by the Italian election result, one which should not have been much of a surprise to those following opinion polls. It again points to a skittish market full of carry traders with large positions and low conviction captivated by the siren song of momentum. Similar to 2007, fundamentals are diverging from the rosy picture painted by risk assets. The European situation continues to deteriorate just like the US economy and housing market from March to July 2007 when the first realisation of the enormity of the problem dawned on markets (see credit index graphs above). At that time too the market believed in the omnipotence of geniuses who opined that "the impact on the broader economy and financial markets of the problems in the subprime market seems likely to be contained".

European growth is surprising on the downside, unemployment on the upside (apart from Germany for the time being) and deficit targets are being pushed back not just in the periphery (eg. France and surprisingly and ironically Holland). Moreover the internal situation in austerity-hit countries is being ignored. For example Greece, which has again slipped off the radar under the 'problem solved' assumption, is in panic as medical supplies run out because pharma companies are apparently not supplying the country.

Policymakers by continuing to do what it takes to revert to status quo ante are cutting the ground from under their feet. Nothing illustrates this better than the deafening silence on the fact that 55% of Italian voters rejected austerity. Yet the question being asked by the European political elite is not why electorate after electorate is rejecting their poisonous economic prescriptions but why Italy elected two "clowns"?

The current situation is not stable nor is it tending towards stability despite markets thinking otherwise. The only difference now is that in contrast to 2007, policymakers (read: central bankers) are insistent on reassuring the markets into a continued state of exuberance. How long this policymaker pretence of knowledge continues to fool is difficult to say. The lesson from 2007 is to patiently await the inevitable denouement by "hedging" negative carry contrarian positions with high-beta liquid positive carry ones[1].

--------------------------------------------------------
Footnote:
[1] At that time I funded the carry on my ultra short financials positions by being long high-yield credit through iTraxx Xover. Apart from balancing the carry, this had three advantages: first, the relatively small size of the position ensured a quick and easy out; second, broad market rallies led to positive mark-to-market P&L as financial spreads moved only a little if at all; and third, Xover had a greater asymmetric payoff profile due to higher convexity as duration fell faster on spreads spiking up.
Posted by Shashank Khare at 22:47