Sticking to market tradition, investors took a shot of hopium and a swig of Kool-Aid and came back in the new year to chase return-free risks. The consensus seems to be that the EU is on the mend; US political brinkmanship is an opportunity to buy the dips; China’s managed a soft landing and its growth, albeit slower, has reached a permanently high plateau; Japan has imbibed Bernanke’s ‘can do’ spirit and is printing its way to growth; and all’s right with the rest of the world. Of course on sober reflection almost everyone will admit to risks but they are apparently deep in the future and as long as central bankers keep DJing, they’ll keep dancing.

Unfortunately having seen chronic hopium addicts buying Greek bonds at 9% yield and holding on until PSI, I know the damage that hopium can wreak. Therefore before experimenting consider the facts:

The myth of EU progress

Apparently the politicians have finally “got it” (as they have from time to time over the last 3 years). In addition Draghi’s bazooka brigade has cowed the opposition without firing a single shot. Which is just as well since the ammo is of dubious quality (remember SMP?) and there are serious doubts of the brigade ever opening fire in the face of German opposition.

The reality is that economic fundamentals continue to deteriorate. As Graph-1 shows, industrial production is declining across the board.

Graph 1: Recovery is here; only if seen in a mirror 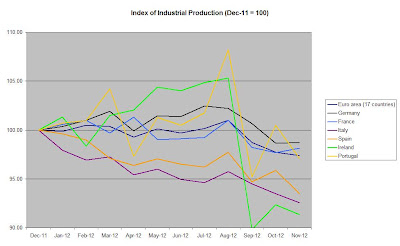 A wider picture (Graph-2) shows that the index of industrial production is now below levels seen at the end of 2003.

Graph 2: Rip van Winkle would not notice any difference 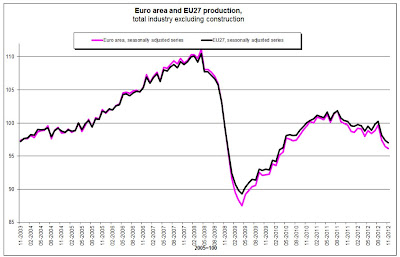 Now even the German engine is spluttering as GDP fell last quarter. But there is no need to worry as analysts have sagely proclaimed that “The downturn should be short-lived. Key export markets such as US and China are starting to pick up, while improved sentiment surrounding Europe’s three-year-old debt crisis is expected to spur a recovery in the euro zone this year.” One only hopes that these purveyors of Kool Aid are right because a slowing economy is going to further erode support for bailouts.

Falling production and growth is reflected in European employment figures. Unemployment is the highest since 2001 (Graph-3) and not showing any realistic signs of improvement. Despite the Irish success story, unemployment there remains stubbornly near 15% (although it seems to be inching downwards).

Graph 3: If they can’t have jobs, let us have summits 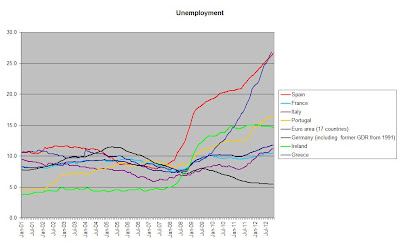 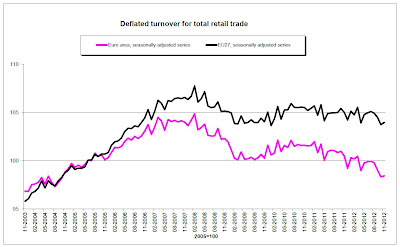 The hope is that politicians can break this vicious cycle through acting decisively. After all at the last summit they decided to be decisive and resolved to be resolute to keep the union together. The result was a watered down bank supervision framework with tough decisions on common resolution framework and deposit guarantees left for later. And about that bold initiative to break the sovereign-bank feedback loop: there has been a change of plans. To be fair, the Germans, Dutch and Finns had emphasised way back in September that ESM funds will only be available after private sector bail-ins and would have to be guaranteed by the sovereign. However, it hasn’t percolated through the hopium daze as investors “rediscover” Eurozone bank bonds. The quote from one high-yield portfolio manager encapsulates the daze perfectly “The world has changed in the last six months. It’s less risky.”

It is not as if nothing has changed for the better. Italy’s step towards an elected government is a step forward for democracy. Unfortunately the market’s beloved unelected technocrat isn’t polling too well as his centrist coalition is stuck in third place with 14.5% of the vote. The centre-left looks set to gain the highest number of seats with 37.8% of the vote. Tough reforms seem unlikely in such a scenario. Moreover if a majority eludes them, which is likely, fractious and unstable coalitions are going to make a reappearance.

The other set of elections which are potentially problematic are the German national elections. They are going to put a dampener on Merkel’s willingness to compromise and act. Remember the North Rhine Westphalia elections in 2010 which delayed the initial response to the Greek crisis? The opposition SPD may be more sympathetic to the European ideal but no party is campaigning to give carte blanche to Club Med. The Germans want Europe but they want it on their terms. Unfortunately those terms are difficult to stick to and create resentment in southern Europe.

So at the end of the third year of the European crisis there has not been an end in either economic or political trends. The only straw which can be grasped to support the thesis that something has changed for the better is Draghi’s bluff to quasi-monetise (OMT still requires sterilisation like SMP). This is not a solution but only an attempt to gain time for reforms to start working and growth to resume. Draghi has succeeded in this aim but unfortunately reforms have been half-hearted and with the pressure off the sense of urgency has also been lost again (eg. Spain). Meanwhile growth is still elusive and facing the twin headwinds of monetary and fiscal policy. For the former credit availability is more important than ECB policy rates which are largely irrelevant because risk premia and credit rationing outweigh them. And the picture on credit is not optimistic as Graph-5 shows. Although the level of interest rates have largely decreased, banks have imposed other costs to make up for falling net interest margins. They have also reduced loan sizes and increased collateral requirements.

Graph 5: A banker loans only to those who don’t need it 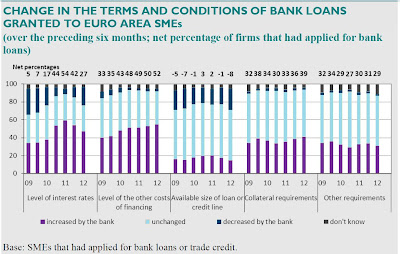 Add an austere fiscal policy and a structural framework which inhibits bankruptcy (leading to corporate zombification) and one has a perfect recipe for disaster. No wonder that the chefs are liberally doling out Kool Aid as aperitif to numb the pain of the main course.