Part-I: Why improving current account balances don’t give the full picture on competitiveness

The second plank of improving primary balances on which the Economist’s Euro-optimism rests is also as shaky as the first. (NB: Primary balance is the difference between government revenue and expenditure before interest on debt). Although primary balances in the periphery are improving and has returned to surplus, it is not yet cause for cheer. Indebtedness is still increasing as Graph 1 shows.
Graph 1 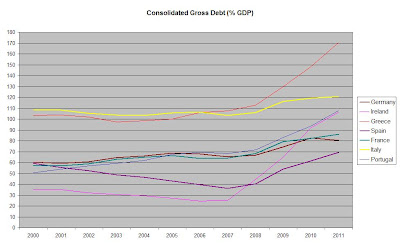 Primary balance is only one part of the picture and a surplus is necessary but not sufficient to prevent debt from spiralling out of control. Despite a primary surplus, debt can still increase if the interest paid on debt increases more than in proportion (as explained in the box below).

The deteriorating fiscal situation has not been kind to peripheral yields. As Graph 2 shows average 10-year yields have been north of 5% since the middle of last year for all peripherals (and longer for , and ).
Graph 2 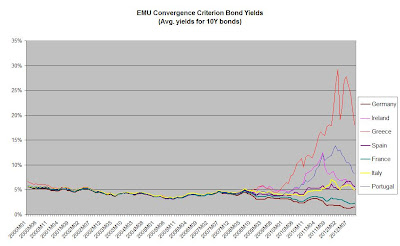 Short-end rates are lower but still not low enough to allow debt sustainability (Table 1). Either primary deficits improve massively or bond yields reduce dramatically (even going negative for peripherals). Neither seems likely as self-defeating austerity precludes the former and the latter is impossible even with OMT. The situation is fairly dire for and since neither has ever achieved the required primary surplus in the last 12 years. and are the closest to realising the required primary surplus. However, as debt piles up in the interim the moving target may prove elusive especially if maturing lower interest rate debt is replaced by debt with higher interest. This trend is already in play and can be discerned by the declining capability to service interest as seen by the increase in ratio of interest payments to revenue (Graph 3 below). 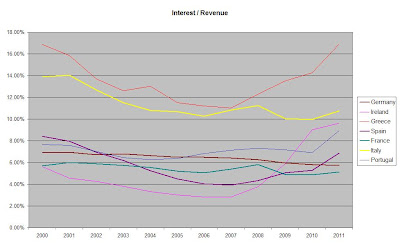 In short, primary surpluses are just a milestone in the never-ending road to debt-sustainability at the end of the rainbow. All the summits, confidence-boosting press conferences, back-slapping solidarity and grand plans have failed to stem higher debt, higher interest rates (despite unusually loose monetary policy) and lower interest service ability in peripheral nations.
Posted by Shashank Khare at 13:25