Say what the struggle hath availeth (Part I)

The recent issue of the Economist had a moderately optimistic piece on peripheral economies restructuring and becoming more competitive. The twin planks on which this assessment was based were improved primary budget balance and current account balance. The article even started with a heart-warming story of shipping cars to for the first time.

Alas, peering under the bonnet reveals that the peripheral engine is still shot. Looking at the trade deficit with four major EU trade partners shows that there is one clear winner and it is not in the periphery. (Trade deficit which covers goods is a better indicator of competitiveness which is all about making and selling “stuff” - see footnote).

First spot the country with improved terms of trade with . 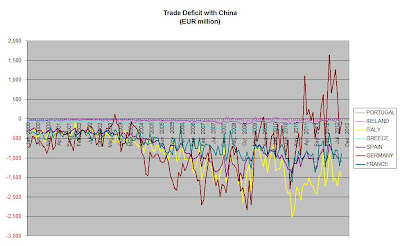 Then see if it is the same country which has massively improved its terms of trade with too. 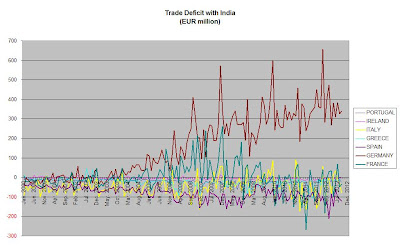 Surely the world’s consumer of last resort, the will be different. Um…no. 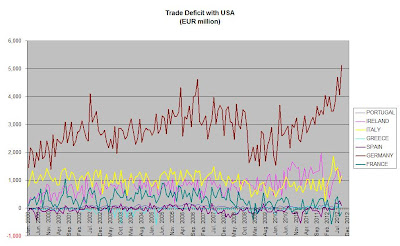 So with which country have the peripherals improved their terms of trade? The answer is the country whose motor is shot even more than Europe’s – . But even here you have to look closely to see the improvement. 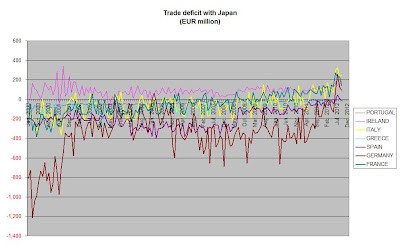 Combining all the above, it is clear that Germany is powering ahead, Ireland is steadily improving, Spain has stabilised but stalled and Italy and France are losing steam with the latter in worse shape. The Economist was right about exploding baguettes. 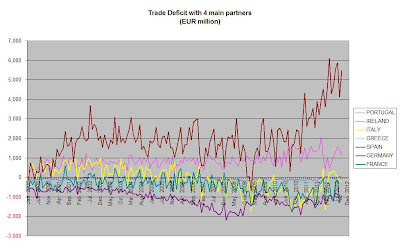 Footnote: Services covers traditional items, such as travel and transportation and items, such as communications, financial and computer services, royalties and license fees, and many types of other business services. Looking only at goods also strips out services rendered purely for tax optimisation purposes which skew balances for countries like Ireland.
Posted by Shashank Khare at 09:34