History of the World in One Graph 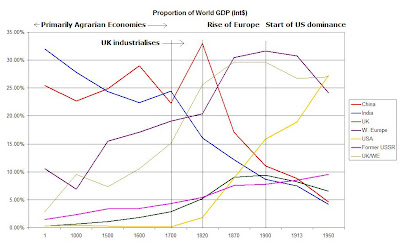 Source: Angus Maddison
Note: GDP is expressed in Geary-Khamis 1990 dollars therefore proportions are based on PPP not on absolute nominal figures. This better links GDP to living standards.

Pre-1700
Primarily agrarian economies where economic might was based on extent of fertile land and size of population. Not surprisingly, and with 50% of the world’s population were behemoths accounting for more than half of the world economy.

1700-1820
Industrial revolution started in the mid-18th century in . The rapid increase in prosperity of relative to Europe is reflected in the sharp rise in the share of UK to ’s GDP from 15% in 1700 to 26% in 1820. The precipitous decline in ’s GDP followed the decline of the Mughal empire after the death of Aurangzeb in 1707. It led to political fragmentation, internecine warfare and the rise of the rapacious East India Company.

1820-1870
Post-Napoleonic era and the rise of nationalism in . Industrialisation arrived alongside and led to a spike in ’s share of world GDP. The hunt for colonies gained importance and became easier due to technological progress. ’s stagnant economy couldn’t withstand the assault (First Opium War was in 1840) and followed ’s decline. The also started to catch up post independence utilising its large landmass, increasing population and benefits of industrialisation.

1870-1900
The zenith of imperial  and British Raj with roughly 13% of world’s population accounting for 32% of world GDP. By now, western Europe had also caught up with the after German unification and industrialisation (as seen by the static share of in ’s GDP). Tsarist was left far behind, which may have had a bearing on the things to come.

1900-1913
UK-German rivalry and an arms race began as the German economy challenged and finally overtook around 1908. The balance of power shifted as can be seen by the first ever decline in ’s share of European GDP since 1500. The seeds of the Great War were probably sown. On the other side of the world, the continued to move upwards. Lack of industrialisation and colonialism meant and were poor farmers in an urban society.

1913-1950
Europe destroyed itself through two wars and the consequent transfer of wealth to the (along with US's natural development) led to the latter overtaking the former. Communism, the wars and Stalin’s mismanagement didn’t help and its satellites to progress greatly. Their share of world GDP only went up slightly post 1950 and peaked around the 1960s.
Posted by Shashank Khare at 13:34

Email ThisBlogThis!Share to TwitterShare to FacebookShare to Pinterest
Labels: History