After several years of drunkenly handing out guarantees to build Humpty Dumpty after the fall of 2008, UBS has sobered up. Its strategy is now to be a staid wealth manager and corporate bank rather than a global markets high roller. According to the FT 10,000 jobs, in addition to 3,500 announced last year, are set to go.

The first thought of those still drinking from the punchbowl is that this might be the contrarian signal which marks the bottom and high rolling days are just around the corner. Recent Q3 results do seem to encourage the belief that we are slowly but steadily marching towards the good old days. Capital market revenues for the top 5 banks rose 13% over Q2 and 40% compared to Q3 last year.

Unfortunately, the comparison with Q is flattered by the fact that it was when the European sovereign crisis had flared up. Thus the comparative increase of 40% is more a bounce from the abyss than a soaring flight to the sky. The chart below from the Economist shows clearly the bleak picture that the industry is facing. 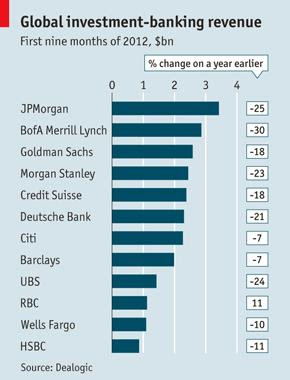 Further, one quarter does not a trend make. Revenues are well below the peak and in decline as Graph 2 shows. 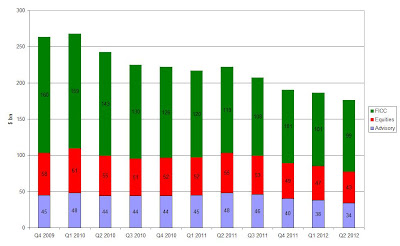 The decline in investment banking revenue is not surprising given the economic and regulatory environment. Elevated uncertainty in both areas has reduced trading and transaction volume directly impacting revenue. More stringent capital requirements and greater risk averseness has led to a decline in trading book inventory, especially in credit, leading to reduced accrual income. This has been further compounded by the low rates environment. Finally, erstwhile profitable business areas such as structured credit and part of structured rates have either not recovered or have been shuttered to preserve capital.

These are structural not cyclical changes. The economic environment may improve as the cycle gradually comes to an end but the regulatory environment is here to stay. A study by McKinsey last year found that regulation could lead to RoE at major investment banks dropping from a pre-regulation era average of 20% to only 7% (Graph 3). Even this looks optimistic as the 20% RoE starting point is the holy grail which banks aspire to but have never found after the crisis (Graph 4). As more regulations come into force the pressure on RoE will only intensify. 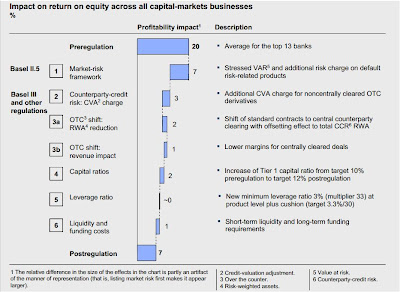 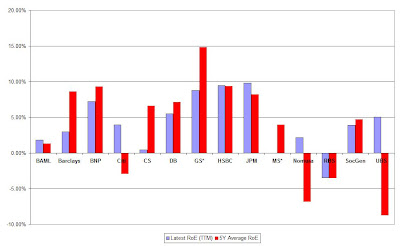 Helpfully, McKinsey state that mitigation by banks can increase RoE from the predicted 7% to 11-12%. Mitigation involves the usual cocktail of reduced headcount, increased automation and balance sheet and risk model “optimisation”. (The latter harks back to the good old days, see Morgan Stanley’s latest effort to get an idea). However, 11-12% is barely higher than cost of equity which is around 10-11% for banks. Moreover, it is substantially lower than the RoE target at all banks. For example, despite a revision lower, Deutsche Bank and Credit Suisse are still targeting a 15% RoE. Incidentally, after the cuts UBS is also targeting an RoE of at least 15% from 2015 onwards.

These RoE targets can only be achieved in either one of three ways. First is the UBS way of vigourous cost-cutting and shuttering of businesses which earn sub-par RoE. The impact of regulations on business areas, as calculated by McKinsey, is shown in Graph 5. It makes UBS’s strategy of staying in FX and Equities but exiting everything else crystal clear. 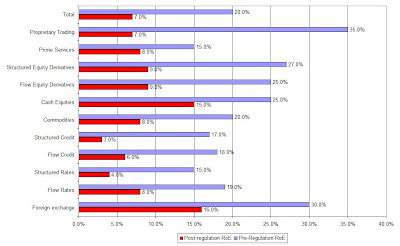 The second way is to bias the balance sheet towards high yielding assets. This is extremely difficult in the current ZIRP and QE environment with flat yield curves and "safe" sovereign long-rates under 3%. Higher yield can only come at the cost of higher credit and liquidity risk which reduces its appeal. It also attracts higher capital charges dampening its appeal further. Moreover, funding costs have not fallen as much as gross yields leading to a margin squeeze.

The third way is through the oldest trick in the book; leverage. Pre-crisis, leverage ratios of many banks had reached above 40:1 (meaning that a 2.5% decline in asset value would have resulted in bankruptcy). Although Basel-3 has clamped down on such egregious behaviour by restricting leverage to 33:1, banks do not need to conform until 2018. Levering up nonetheless and letting the next guy handle it would be in the spirit of the go-go years but unfortunately neither regulators nor investors will stand for it.

Therefore, it does seem as if UBS-type swingeing cuts are the only way to meet RoE targets. Sobering news indeed for the several hundred thousand employed in the great game.
Posted by Shashank Khare at 23:56