The sorry state of the CDS market

The days when every banking graduate wanted to be on the credit trading or structuring desk are long over. From being feted as sophisticated tools which dispersed risk and contributed to “enhanced resilience” of banks, CDS became the chief culprit behind the financial crash. AIG’s mindless use of CDS not only sealed its fate but also crystallised public perception of CDS which continues to this day. CDS are now the evil speculator’s weapon of mass destruction. 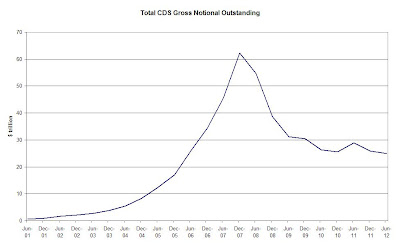 Of course, it can be argued that gross notional is misleading due to the post-crisis trend towards trade compression and central clearing (see box). 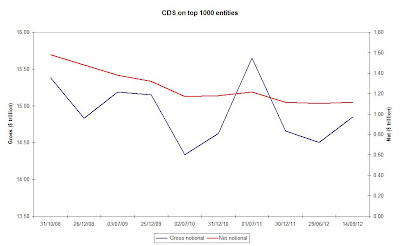 As the market has shrunk there has been a consequent decline in liquidity. Although quite apparent to traders, it can also be gauged from the maturity profile of outstanding CDS (Graph 3). In fact, the maturity profile is quite interesting. It indicates how trading has moved almost exclusively to the 5-year contract while both 5 and 10-year contracts were traded earlier. 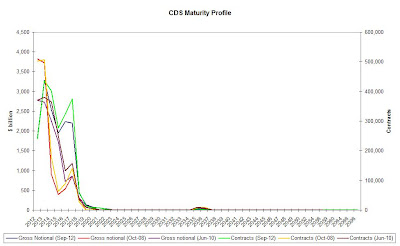 So what does it all mean? Reports on the death of CDS may be exaggerated but the market is definitely caught in a downward spiral. The good news is that financial products once created seldom die. CDS do play a role in risk mitigation and distribution as long as institutions do not attempt to emulate AIG. Although much has been made of the fact that CDS is primarily traded between dealers but this is to be expected since institutions which run the largest credit risk (apart from the ECB) are banks. The bad news is that regulation, collateral requirements (due to central counterparties and more stringent CSAs) and capital charges are going to limit CDS use on bank trading books. Moreover, the whale’s demise is also going to curtail their popularity as hedges for unrelated risks (one hopes this to be the case but the primary purpose of hedging is regulatory gaming not reducing risk so a whale here and there may be ignored as a tempest in a teapot).

After an exponential rise, a logarithmic decay seems to be in store for these vilified financial weapons of mass destruction. For the incoming batch of banking graduates, they are this decade’s equivalent to ‘equities in ’. Politicians would do well to choose another scapegoat quickly in case a crisis flares up again.
Posted by Shashank Khare at 22:45

Email ThisBlogThis!Share to TwitterShare to FacebookShare to Pinterest
Labels: CDS