Singh gets his mojo. Yeah right.

The hopium dealers are falling over themselves to re-peddle the story just as the one is souring. Thus the headlines in FT “Manmohan gets his mojo back at last” along with the Economist proclaiming that “Manmohan Singh has rediscovered his vim”. The beloved barometer of hopium addicts, i.e. the stock market, duly rose to a 14-month high.

Amidst all the cheering a puzzled Indian might well ask the cause of this exuberance. It turns out that there are several causes.

First, the hike in the price of diesel leading to reduced subsidy burden on the government budget. This is supposed to be a start towards a more reformist agenda. One has to admire the spin. The last time diesel prices were raised was in June 2011. With oil prices roughly where they were and the rupee depreciating by 18% against the dollar since then, the subsidy burden was unsustainable. It is akin to handing over one’s wallet to a mugger and then trying to portray it as “charity”. In any case, the hike nets out to zero at the aggregate level since government spending is replaced by consumer spending on fuel.

Second, the much touted opening of the retail sector to majority foreign-owned firms is supposed to inject dynamism into both agricultural and retail sectors. However, the important caveat that has been missed is that the implementation of this decision to allow majority foreign-owned firms into the retail sector is left to the states. A stroke of genius which would be wholeheartedly approved by Sir Humphrey Appleby. A decision has seen to be taken when in reality the decision has been delegated to another level of administration. Apart from the obvious costs imposed by an additional layer of bureaucracy and permission requirements, the fact that some states can disallow foreign firms means that operations may not achieve scale and supply chains may remain fragmented. Thus the biggest advantages of an organised retail sector are lost. It is too early to celebrate this as a game changing, mojo rejuvenating move. That is if the fragmentation of decision-making power and added political uncertainty is to be celebrated at all.

Third, additional foreign investment has been allowed in the aviation sector. Foreign carriers can now buy upto a 49% stake in domestic carriers. The desire of foreign airlines to invest is very clear as the following excerpt from a LiveMint news article shows.

Translation: Good job of getting the mojo back old chap. Excuse me I’m getting a call on the other line.

By the way, this decision is absolutely not indicative of crony capitalism as the government’s convoluted and laboured logic makes clear. “Denial of access to foreign capital could result in the collapse of many…domestic airlines, creating a systemic risk for financial institutions, and a vital gap in the country’s infrastructure.” One doesn’t know for sure if the mojo is back but the brain certainly isn’t. The only positive is the hope that instead of the government, some clueless foreigner is going to bail out a struggling domestic airline.

Fourth, FDI limits in broadcasting have been raised to 74% and in power trading exchanges to 49%. This is probably the only measure where investment may lead to development and jobs.

Finally, disinvestment in PSUs (Oil India Ltd, MMTC Ltd, Hindustan Copper, National Aluminium Co.) is supposed to signal the virility of the 1991 liberalisation era is back. Once again spin disguises the reality that family silver is being sold to fund a burgeoning budget deficit. With national elections in 2014, an embattled ruling party cannot afford a downgrade to junk status and ensuing financial crash. Therefore the need to disinvest and make budget numbers appealing enough for Moody’s and S&P. Moreover, foreign investment or private investment in government-owned enterprises does not lead to any efficiency gains. TCI’s woes with Coal India Ltd. make it very clear that private investors do not have any say in managerial and strategic decisions. PSUs will continue to be run to fulfill the objectives of the government and shareholder value maximisation is not one of them.

As for the vote of confidence by the stock market, the graph below makes it clear where the money has come from. Foreign Institutional Investors (FIIs) have invested $1.67bn in the month of September with a whopping $1.15bn of that coming in the four days after Mr. Singh apparently found his mojo. In stark contrast domestic mutual fund investors have withdrawn $323m in September. Most of it ($250m) was withdrawn in the four days following the “reform” announcement. Do the foreigners know something that the locals don't? 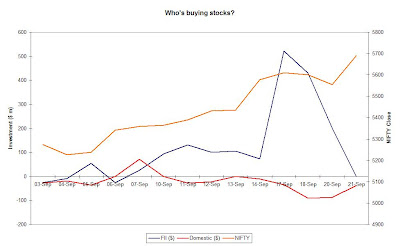 The exuberance may be linked to Ben Bernanke and Mario Draghi’s promise of supplying mojo pills for investors ad infinitum but risking more than a billion dollars only on the hope of an 80 year old getting his mojo back is a bit irrational.
Posted by Shashank Khare at 19:42