Apart from the obvious answer that accelerating and sustaining the nascent economic recovery requires a combination of fiscal policy and structural reform, the reason to avoid another round of QE is simply that the last two rounds haven’t achieved much. Similar to a boy with a hammer who considers everything a nail; central bankers steeped in monetary dogma consider every policy solution to be monetary. Despite the limitations of monetary policy becoming apparent and the dangers of continuing with the present course of action, Bernanke and company seem undeterred.

The Federal Reserve helpfully explains its policy to dummies on its website: “Low interest rates help households and businesses finance new spending and help support the prices of many other assets, such as stocks and houses.”

Let us begin with looking at the Fed’s generosity in trying to enable new spending. Bernanke and are following the Greenspanian policy of attempting (this qualification is necessary as we shall see later) to artificially lower the cost of capital to engineer a recovery through privatised fiscal stimulus. This is both ironic and amusing. Put plainly, rather than the government spending money to hire people to dig ditches and fill them, the Fed wants private enterprise to borrow money to hire people to dig ditches and fill them. It is fairly obvious why the previous two rounds of QE, followed by Operation Twist (buying long dated bonds and selling short dated ones to lower long-term interest rates) and record low Federal Funds rate have not achieved the much desired outcome of privately funded ditch digging.

Entrepreneurs are not enthused because to two reasons. The first is the economic uncertainty which dampens risk appetite, i.e. animal spirits are missing. The second, related to the first, is the broken transmission between Fed policy rate and the actual interest rates faced by a majority of the borrowers.

If the entrepreneur is uncertain of recouping his investment and making a profit, he is unlikely to invest even if he is able to borrow on very easy terms. This is why some experts advocate a fiscal stimulus. The government is the only economic actor which can invest without regard to profit or loss[1]. For a consumer, borrowing to finance spending is folly in the extreme when his future income stream is uncertain due to job insecurity in a shaky economy. Entrepreneur pessimism and subdued demand feed off each other and form a vicious circle which cheap money cannot break.

Further making monetary policy impotent is the broken transmission between policy interest rates and actual interest rates for borrowers. In an economy with high uncertainty and dominance of risk aversion, banks are unlikely to provide cheap loans to all and sundry. The most creditworthy borrowers will benefit while the least will be locked out of the market, in effect facing infinitely high interest rates. This translates into a small number of large firms and rich individuals benefiting disproportionately while the actual motor of economic growth, the small firm[2], is starved of fuel. The July Fed survey of bank lending practices proves this to be the case. Even though lending standards to businesses eased and loan demand increased, it was mostly due to large and middle-market firms (annual sales of $50m or more). Standards and loan demand by small firms were little changed. In addition, lending standards for prime mortgages (high credit quality) were unchanged but tightened for non-traditional mortgages. Despite easing in lending standards seen in the latest survey, overall lending standards were still tighter than the average since 2005. Therefore, in most cases, the Fed’s attempt to artificially lower the cost of capital has failed.

The Fed’s failure to promote new spending is benign compared to the more malign effect of distorting the market price of capital. The good doctors of the Federal Reserve, rather than recognising the potentially dangerous side-effects[3] of their medicine, hail them as signs of a cure. Therefore they boldly state their intention to support the prices of “many other assets, such as stocks and houses”.

The economic theory underlying this prescription is the so-called wealth effect. It posits that high asset prices encourage asset owners to spend more by making them feel wealthy. Like most laws of economics, it is not generally applicable but only true within a certain range. In a normal economy where the future seems predictable, higher asset prices do engender consumer confidence. However, confidence and spending are unlikely to be boosted in an era of high uncertainty and where people feel that asset prices are being artificially kept higher. Disconnect between stock prices (blue) and consumer confidence (pink) is plainly evident in the graph below. 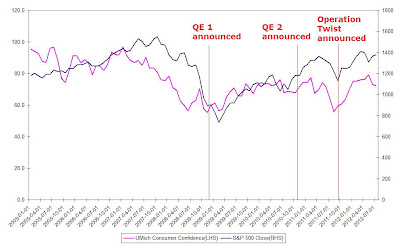 A rise in asset prices is not a sign of confidence but a sign of currency debasement. As Adam Smith observed, an increase in gold or silver without any increase in the productive capacity of the economy only leads to a decline in the relative price of those metals. US stocks are higher not because investors perceive a rosy future and hence value them more; they are higher because they perceive the dollar as less valuable.

This decline in the US dollar’s value has so far not shown up in consumer price indices because of two reasons. The first is the lack of a viable currency to replace the dollar which prevents foreigners from fleeing it and causing a surge in import prices. The second is due to the way monetary policy works. As noted above, access to cheap money is available to only a few wealthy individuals and large corporations. They only spend a fraction of their income and given the economic uncertainty are loath to make new investments. Therefore by sitting on a large and increasing pile of cash they largely neutralise any attempt by the Fed to increase in the money supply. Rather than make new investments, they buy assets. Graph 2 shows quite plainly that the Fed’s money pumping has not resulted in a proportional increase in broader money supply (M2). The ratio of broad money (M2) to narrow money (M1) is at multi-year lows despite the Fed pumping in more than a trillion dollars. All it has done is cause a dash out of the dollar and into assets such as equity and commodities. Thus ultra loose monetary policy has led to asset inflation rather than the normal kind which people initially predicted.

Graph 2: Pushing on a string 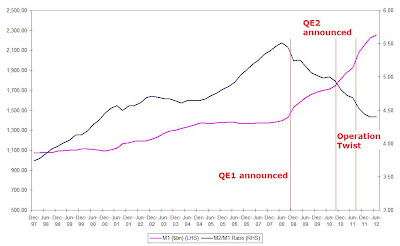 Such artificial asset price inflation not only has doubtful benefits for the real economy, it also distorts the capital allocation process. A central bank ‘put’ makes speculation in financial assets more attractive compared to new investment. It promotes the rent-seeking financial sector at the expense of the productive sector of the economy. This was one of the factors for the rapid growth of finance in the celebrated ‘Greenspan put’ era. Moreover, if artificially low rates succeed in financing new spending, a large part is likely to be of dubious quality. Projects unviable without central bank largesse will be taken on as low interest rates incorrectly signal their viability. As soon as rates revert to normal, distress is sure to follow. A prolonged period of artificially low rates and easy money can store up problems for later. In some cases it may exacerbate the very problems that policy was meant to solve by causing large scale mal-investment which inhibits long-term growth.

Given the evidence, undertaking another round of QE fits Einstein's definition of insanity. No nation has been able to print its way to prosperity. Indeed, history shows the opposite is true. Declining empires usually accelerate currency debasement and consequently their own decline. In the extreme, the economy collapses due to a loss of confidence in institutions, assets and currency. However, the is far away from such a scenario. The natural resilience of the economy means that, however protracted, full recovery will occur. Fortunately, policymakers’ dogmatic behaviour and impatience can only retard progress towards recovery it cannot arrest it. Adam Smith captured it perfectly when he said “the uniform, constant, and uninterrupted effort of every man to better his condition…is frequently powerful enough to maintain the natural progress of things towards improvement, in spite both of the extravagance of government, and of the greatest errors of administration…it frequently restores health and vigour to the constitution, in spite not only of the disease, but the absurd prescriptions of the doctor.” He only missed out one important thing. Despite a natural recovery, credit is always taken by the good doctor and his absurd prescriptions.
Footnotes:

[1] This of course has degenerated into the politics of pork, the discussion of which is outside the scope of this article.
[2] Corporatists favouring behemoths should look at the facts: According to the census (http://www.census.gov/econ/smallbus.html), small firms (revenues less than $50m and less than 500 employees) employed approximately half of private sector employees and comprised 99.7% of all firms.
[3] Pointed out by William White in a paper: http://www.dallasfed.org/assets/documents/institute/wpapers/2012/0126.pdf
Posted by Shashank Khare at 21:15