The rise (and fall) of the speculator

Belying the recent risk asset exuberance, folks in the market are quite gloomy. Everyone seems to be saying the same thing; ‘It’s a tough market’. High on Draghi one day, despondent the other. In an environment where one man’s soundbite is another man’s profit (or loss), participants are naturally choosing to excuse themselves from the market rather than risk their capital. Trading volume across asset classes is subdued. But is that necessarily a bad thing?

Conventional thinking holds that higher transaction volumes imply greater liquidity1 and depth2. And these are fundamental to a well functioning capital market which efficiently allocates capital in the economy. However, this is missing the wood for the trees. Liquidity and depth are a consequence of well functioning markets not a cause. A large number of transactions do not imply that capital is being efficiently allocated. A reductio ad absurdum argument where the market only consists of Ponzi schemes (the European sovereign debt market for the cynical) shows this assertion to be true. Such a market can show a high volume of transactions as investors flit from one scheme to another in an attempt to gather high returns and exit before the inevitable bankruptcy. But it will be completely inefficient in allocating capital to productive uses.

Although liquidity and depth are beneficial in broadening the set of investors and increasing the capital available to enterprises in the economy, they should not be viewed as goals in themselves. This present undue emphasis on them is because of the rise of the short-term speculator.

Developments over the last three decades have favoured the short-term speculator over the long-term investor. Financial deregulation, improved technology, financial innovation and the exponential rise of specious quantitative financial models have all played a role. To understand how this has happened one needs to distinguish between a speculator and investor and consider their different motives.

Short-term speculators are interested in making a relatively small gain by selling assets at a price which is higher than where they purchased them. The ‘buy low-sell high’ cliché originated from them. Unlike the long-term investor they are only peripherally interested in the long-term value of the asset. Their main aim is to gauge the demand and supply of the asset and accordingly make a trading decision. Therefore they need a liquid and deep market to absorb their continual buying and selling of assets. They can also easily obtain information on demand and supply in such a market. This information is the ‘edge’ which speculators seek. It is expressed through their desire to ‘see the flow’, i.e. know who is buying and selling which assets. The growth in importance of ‘flow trading’ at banks has coincided with the rise of the speculator. No less a person than Fischer Black (of Black-Scholes fame) advocated devoting more resources to flow trading as opposed to proprietary trading while at Goldman Sachs. He viewed the former as having a more sustainable advantage and profit potential.

While speculators cannot survive without the oxygen of liquidity and depth, these characteristics are only marginally useful to the long-term investor. These investors are interested in the enterprise underlying the financial asset. Rather than analyse the number and motives of other market participants they evaluate the productive enterprise to determine their expected return. In contrast to the speculator, they are not looking for liquidity and depth per se; they only wish to be able to enter into positions and sometimes exit them when the value proposition deteriorates or capital is required elsewhere. Warren Buffett with his preference for an infinite holding period typifies such investors.

With these different motives in mind it is easy to see how deregulation and technology have favoured the speculator. As deregulation allowed more institutions and individuals to transact, technology enabled them to do so more frequently and with ease. A click replaced shouting men with flailing arms and real-time risk engines replaced paper and pencil tallying. It also allowed enormous quantities of noise to be delivered straight to trading terminals where speculators, men or machine, could instantaneously react by buying or selling something. Thus deregulation and improvements in technology have delivered the twin benefits of reduced transaction costs with increased number of market participants. For a speculator looking to flip a stock for 5% gain in a month, a 1% transaction cost eats up 20% of the return. In contrast, transaction costs are peripheral for an investor looking for a 5% gain per annum for the next 10 years. A 1% cost will reduce return by less than 2%.

An increase in market participants not only enhances liquidity and depth but it also leads to an increased pool of “greater fools”, at whose expense the speculator can benefit. It is for this reason that Keynes quipped that “It is generally agreed that casinos should, in the public interest, be inaccessible and expensive. And perhaps the same is true of Stock Exchanges.”

However, the biggest benefit of deregulation and technology to the speculator was to cause the rise of quantitative finance. With stock and bond trading becoming accessible and cheap, interest naturally increased even in academia. And the increase in computing power enabled clever models based on unrealistic assumptions to transcend the barrier from academic discourse to practical use. Consequently financial innovation shifted into higher gear and trading models started being employed to exactly quantify risk, discover pricing discrepancies and predict asset prices. Almost all these models were speculative tools in that they sought to analyse asset prices rather than the underlying enterprise which affected the price. Most were successful until the market exposed their shortcomings. However this early success and faith in clever men and mathematics enabled them to gain widespread acceptance. As a result speculators employing such models found people clamouring to fund them and banks eager to provide them leverage.

All these developments not only swelled the ranks of speculators but also created an industry which was focused on the short-term and detrimental to the survival of the long-term investor. It established and encouraged constant benchmarking, portfolio churning and short-term trading. As prices remained disconnected from fundamentals for long periods of time, long-term investors either lost hope or lost financial backing. The shift towards speculation was also reinforced by the human tendency which gives rise to speculation in the first place – preference for short-term rewards over more distant ones. An indicator of this shift is the massive reduction in stock holding periods across US and stocks over time (Graph 1 and 2). The decline is especially marked after the advent of deregulation and the rise of quantitative finance which started about 35 years ago. 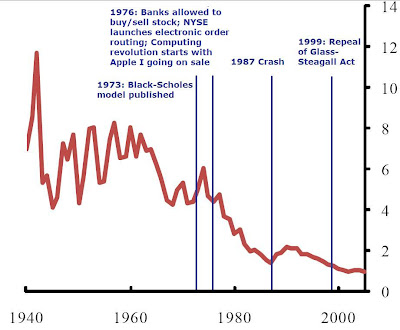 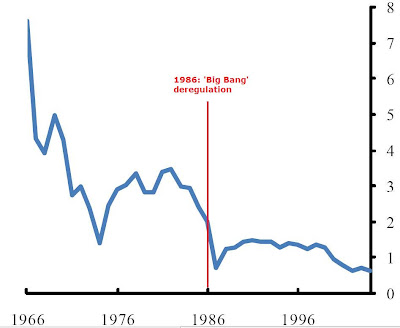 The decline in holding period has gone hand-in-hand with an increase in traded volume (Graph 3). But the positive impact on liquidity and depth due to speculators has made very little difference on efficiency of capital allocation. In fact, if anything, it has reduced efficiency of capital allocation. The current financial crises starting from the credit crisis in 2007 demonstrate a gigantic misallocation of capital. 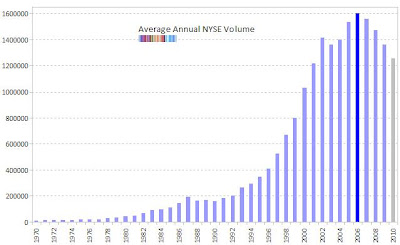 http://www.tradersnarrative.com/where-has-all-the-volume-gone-4286.html
Currently short-termism has become so acute that supposedly ‘long-term’ fund managers have an investment horizon of 2-3 months. For an average fund a few months of “poor” performance leads to an exodus of investors. The fear of underperformance has resulted in herding where a majority of speculators follow the same strategy leading to enhanced volatility and meagre returns. And compounding the problem is the market’s brutal exposé of flawed assumptions underlying immaculate mathematics. Add re-regulation of financial markets and the result is a trading environment equivalent to the environment dinosaurs faced after the meteorite impact. Some speculators have been annihilated, others are left dazed, confused and wary of trading. This has led to a drop in liquidity and depth creating a negative spiral as more speculators either exit or pull back from trading. It is too early to write a requiem for speculators but the signs definitely point to the long-term investor staging a comeback.
Footnotes:


[1] Liquidity is defined as the ability to buy/sell an asset without affecting the price and where the difference between buying and selling price, at any instant, is minimal. It can be measured by the average amount which can be transacted at the bid and offer price and the absolute difference between the bid and offer price.
[2] Depth is defined as the amount of a particular asset which can be sold without affecting the price too much. It can be measured by the amount of an asset bought/sold which moves the price by not more than a certain, say 1, percent from the price prevailing before the transaction.
Posted by Shashank Khare at 09:21