Since doubts surround Chinese economic data, one way to infer the health of the Asian dragon is to look at the impact on its neighbours. This does not provide a very comforting picture of the Chinese economy. Growth across the region is spluttering even as hopes of a gigantic Chinese stimulus remain undimmed.

Naturally part of the slowdown is due to a lacklustre recovery and the slow-motion implosion of the EU. However, plays an exceedingly large and important commercial role in the region. It has supplanted as the primary export destination for , and , three of the four largest economies in . A very simplistic model of the global goods supply chain is illustrated below.

As developed world demand fails to regain the growth rates prevailing before the 2007 credit crisis, it impacts demand all through the chain. Moreover, even as demand remains anaemic, continued investment in productive capacity has taken place, especially in . This necessitates robust consumer demand to achieve profitability.

Unfortunately, this demand is unlikely to come any time soon from or the rest of the developing world. They simply do not have the purchasing power that the developed world imagined it had during the credit boom. Hopes pinned on Chinese domestic demand are likely to be disappointed. All such talk about Chinese rebalancing and promotion of domestic consumption is mere rhetoric. In , a tiny minority has captured a giant’s share of the wealth generated over the past decade. This is evident from the refusal of Chinese authorities to release the Gini Coefficient (a measure of economic inequality) for the last 11 years. Such lopsided distribution of rewards from growth ensures that domestic consumption cannot supplant export demand any time soon.

Thus as export demand cools, the Chinese economy must either embark on a fresh investment stimulus and create an even more imbalanced economy or reduce imports used in manufacturing export goods. The former has not been forthcoming in any appreciable magnitude so far despite hopium-based belief. The latter implies a lower rate of growth not just for but its suppliers. It also implies lower commodity prices and deterioration of the manufacturing sector. Recent data from economies of Asian neighbours, heavily dependent on the continued march of the Chinese juggernaut, does provide evidence of this slowdown. Table 1 below, shows the recent economic deterioration in the context of the nation’s dependence on as an export market.

The PMI charts are given below. 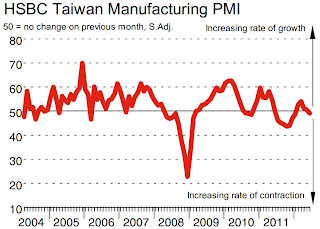 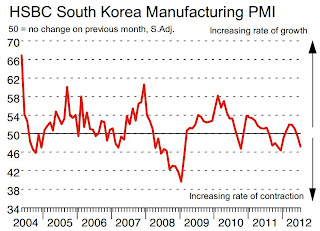 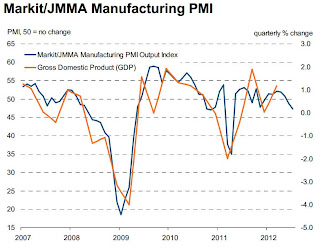 Looking at commodity prices, these also seem to indicate that the great Chinese resource grab is coming to an end. Both copper and oil show a declining trend (Graphs 4 & 5) while coal and iron-ore have plunged to 2½ year lows. 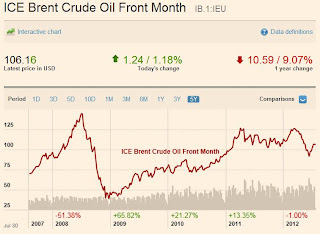 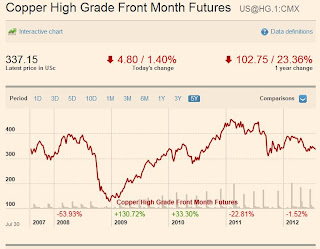 Whether a Chinese slowdown turns into a meltdown is open to question. However, it is likely to persist before any recovery occurs. The sharp turnaround in 2009 was because of the combined bank bailout and monetary easing in the US and Europe along with Chinese stimulus. At this juncture if China acts (a big if) then it is likely to be alone and thus the impact will consequently be more muted. This implies further falls in commodities notably copper of which the Chinese have built a gargantuan inventory and which has not fallen in line with the bleak demand picture.

It also implies a shock to the Australian commodity boom. is the largest export partner for accounting for 25% of total exports. As an example of ’s commodity dependence, 41% of the world’s iron-ore exports are from and it is also home to 57% of the new production coming online. Interestingly new investment has been made assuming a worst-case price of $110 per tonne which is in danger of being breached. A shock to the Aussie economy and consequent RBA cuts are likely to lead to a fall in the Aussie Dollar (AUD). At the moment it is riding high due to the twin advantages of higher yield and perceived safety from the debt detonation of the Eurozone and currency debasement of Ben Bernanke. As yield differentials vanish and safety proves illusory, flows could reverse leading to a sharp drop.

On a micro level, mining and commodity stocks (Rio, BHP) might take a further hit. In addition banks exposed to Asia (HSBC, StanC) might see the souring economy feeding into their balance sheets as the stellar performance of Asian units reverts to mean.

As the Eurozone differs and dithers into oblivion, China is likely to be the unwitting recipient of the power to dictate global markets and policymakers. Ironic.

Disclaimer: All ideas elucidated above should not be taken as investment recommendations. The reader should perform his/her own analysis before making any investments.
Posted by Shashank Khare at 21:43