James Bond, Supermodels and the Euro

Somehow I ended up watching Quantum of Solace on TV. It was as awful as when I saw it the first time. But there is an interesting scene towards the end where Dominic Greene, the main villain, pays off the corrupt Colonel of the Bolivian police in Euros. The dialogue goes like this:

Greene handing over the suitcase full of cash: In Euros, as requested.
Colonel: The dollar isn’t what it used to be anymore.

According to Wikipedia, this scene was shot late-March/early-April 2008. Looking at the chart of EURUSD, this was right at the time when Euro was the strongest against the Dollar around 1.6000 (chart below). It has never achieved that level since and looks unlikely to either. 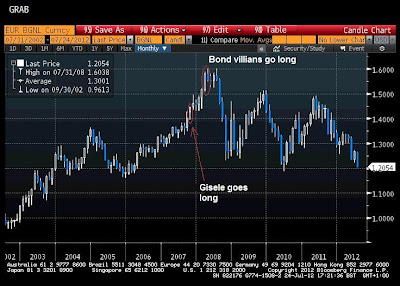 Another contrarian indicator in hindsight was when Gisele Bundchen opted to be paid in Euros in November 2007. At that time EURUSD was around 1.4500 so she’s probably still better off than the poor Bond villains.

Wonder if Skyfall makes any pronouncements on Euro’s demise?
Posted by Shashank Khare at 17:42

Email ThisBlogThis!Share to TwitterShare to FacebookShare to Pinterest
Labels: Humour