The market has given two thumbs up to the European summit concluded last week. Those of a cheerful and optimistic nature have argued that this is the watershed which marks the beginning of a transfer union, a fiscal union and a United States of Europe. Others, with less faith, have chosen to see the glass half empty again.

Much has already been written about how EFSF/ESM are sub-scale and that the summit statement’s ambiguity borders on irrelevance. Therefore there is no need to rehash the same arguments (a brief reading list is given at the end). Moreover, almost everyone agrees that the economics of all rescue proposals is nonsensical. A debt problem is not solved by taking on more debt and employing financial engineering to shift debt burden from one balance sheet to another. Everyone also agrees that the final outcome is now determined almost completely by politics. The impact of economic inevitability can be either be aggravated or mitigated by politics.

This is why the way in which the summit agreement was reached is particularly concerning. It was not generosity but ransom which was forced out of and other northern European countries. The strong-arm tactics used by Mario Monti and Mariano Rajoy caused Danish Prime Minister Helle Thorning-Schmidt to question whether the attendees were being held hostage until concessions were made. This explains the ambiguity and lack of detail in the agreement. and others have given themselves enough loopholes to deny in substance, what they have apparently agreed to in principle. In fact and have already started backpedalling on ESM bond buying. In addition, has stated that direct aid to banks will require several conditions to be met and require a unanimous decision.

Therefore not only have Monti and Rajoy not achieved anything, counterproductively they have created more ill-will between north and south. A degree in psychology is not needed to understand that their ambush would clearly not have been appreciated by the northern European leaders. Monti and Rajoy were uncooperative in this iteration of prisoner’s dilemma and therefore reaped a short respite for both their countries at the cost of a massive loss of face for Merkel and others. But the game is still in play and the consequences are going to be realised later.

The backlash is already building. German newspaper headlines like “Europe reaches for our money” do not promote solidarity amongst citizens. German voters are already unhappy about being treated as a cash machine. Six complaints against the fiscal compact and ESM were lodged with the this weekend. And the opposition SPD is trying to tap this discontent before the 2013 elections by opposing direct bank recapitalisations. All of this puts pressure on Merkel to take a hardline stance in future. Ambuscades in summits do not build credibility, they destroy it. The Germans, Dutch, Finns and Austrians may be forgiven for thinking that the southern Europeans cannot be trusted and want their money with no strings attached.

Unfortunately solidarity is being further strained by deterioration of northern European economies. Eurostat's forecasts for GDP growth are not encouraging as the table below shows. This is already being reflected in the PMIs. German manufacturing PMI fell for a third month in a row to a 36-month low. As the graphs at the end show, other economies aren’t doing too well either.

Table 1: Northern European strength is not infinite (nor is their patience)
Source: Eurostat

Voters and politicians already reluctant to bankroll other countries are going to be even more opposed as their own circumstances deteriorate. Generosity in straitened times requires trust and bonhomie. This is precisely what Monti and Rajoy destroyed with their ambuscade. Economics was already looking dire, now politics has been poisoned too. 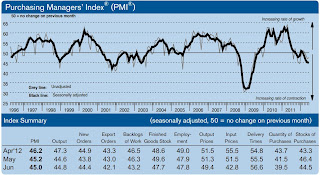 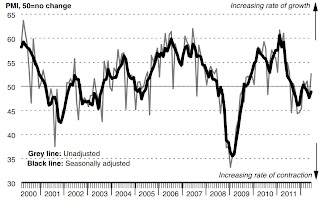 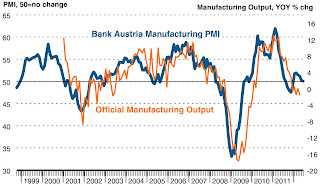 P.S Upshot for traders: Fade the rally in EUR, peripheral bonds and CDS.