Interview question: As the European crisis intensifies, fiscal cliff approaches, Chinese growth starts slowing and risk assets take a dive, in which currency would you park your money?

The consensus answer seems to be the Japanese Yen (JPY). It has appreciated almost 8% from its low against the US dollar in mid-March. Bank of Japan’s refusal to ease further for the time being may account for some of this bounce. However, the Yen’s behaviour is consistent with the Pavlovian market response when the switch is flipped to risk-off.

Apart from renewing headaches for Japanese policymakers, JPY appreciation provides a false sense of security to investors by instantly validating their investment thesis. Investors are falling into the behavioural trap that since buying JPY in moments of crisis has worked before and seems to be working now, it will always work.

To determine whether buying JPY as a safe haven is sound strategy requires some analysis. This requires comparing Japan against the following three main characteristics which define a safe haven currency:
The first two are necessary to attract short-term safe haven flows. All that investors care about is preservation of capital until a crisis blows over. This desire also explains why government bond yields for countries which face significant long-term challenges have gone negative. The third factor operates over a longer-term and determines whether capital brought in during a crisis will stay and whether more capital will be forthcoming after the crisis is over.

Looking at , it satisfies only the first condition of political stability and certainty. Even that is actually a weakness as stability has turned to sclerosis with an inability to break the deflationary status quo. Fiscal and monetary policies being pursued are far from what is desirable in a safe haven.

Japanese fiscal policy and its debt burden make peripheral European nations look like models of prudence. As the graph below shows (reposted from my earlier blog post) ’s debt burden and cost of servicing debt is worse than any European sovereign bar pre-default (pre-PSI) . And this is when interest rates on Japanese bonds have been at record lows.


Graph 1: Debt by a thousand deficits 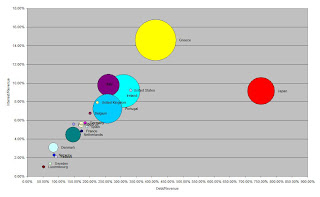 
The argument made to defend this gigantic debt burden as sustainable is the fact that it is held largely by the Japanese and is denominated in JPY. Therefore evil speculators and foreigners cannot manipulate a sell-off causing a self-fulfilling debt crisis like the one in . A large stable base of debt holders may be a necessary condition for debt sustainability but it certainly is not a sufficient one. Ultimately debt has to be repaid and this requires growth. Growth is the one thing that has desired without much success for the past two decades. At the current level of debt, it is highly likely that bond holders suffer real losses even if they get back their nominal investment.

Along with fiscal policy, the soundness of monetary policy is also under question. The Bank of Japan was the first to venture into quantitative easing (QE) in 2001. In April this year, it increased its asset purchase program by 10 trillion Yen to 40 trillion. While Japanese conservatism makes this a relatively small amount as compared to the ammunition deployed by Ben Bernanke, the more popular debaucher of currencies, ’s money stock in relation to its GDP is huge. Japanese M2 money stock (currency in circulation and deposits) currently stands at 175% of GDP. In contrast, Fed’s QE has only managed to boost M2 to 68% of GDP. It is also much higher than other developed countries as Graph 2 shows. Moreover BoJ’s asset purchases unlike the Fed’s are not confined to government bonds and MBS. The asset purchase program can also buy corporate bonds and equity enhancing the risk taken by the central bank. Purely from a monetary perspective, ’s situation is closer to the , whose currency is certainly not a safe haven.

Ironically, cannot reverse its easy money policy without causing a debt crisis. Individuals, institutions and banks are holding an enormous amount of fixed-income securities which will fall in value if BoJ tightens monetary policy. In addition, debt servicing costs for the government will also rise more than in proportion since capital losses on existing debt will force the government to pay a higher premium to sell new debt to investors.

also lacks the third characteristic of a safe haven. Its two lost decades of meagre growth and continuing deflation amidst policy failures cloud future growth prospects. The contribution of exports as a continuing source of strength for the Yen and the economy is exaggerated. The current account surplus is decreasing and stood at a paltry 2% in 2011 according to the IMF. Moreover, Japanese exports are heavily geared towards business investment which will be adversely affected by the global crisis and Chinese slowdown. Graph 3 and 4 show the composition of exports and imports. 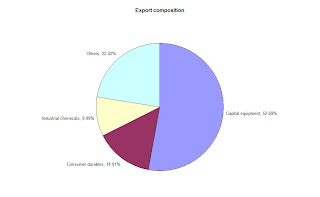 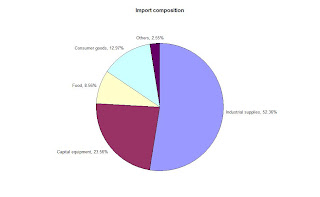 The demographic picture adds to the sense of gloom. The dependency ratio (number of non-working age to working age people) rose from 46.9% in 2000 to 57.1% in 2010. This is set to deteriorate further as the low growth rate means that the number of children entering working age is less than the number retiring. The percentage of children in the total population declined from 14.6% in 2000 to 13.1% in 2010. The lack of growth opportunities at home is shown by the net outflow of capital through direct investment (Graph 5). 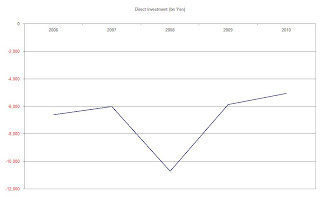 In conclusion, JPY does not satisfy the metrics for being a safe haven. The precarious state of its public finances combined with loose monetary policy which cannot be tightened means that the adjustment has to come through currency depreciation. In addition the state of the economy and aging population is unlikely to attract investment. A Chinese slowdown and decline in global demand will worsen the terms of trade putting further pressure on the Yen. Investors rushing blindly into JPY as a safe haven may find out too late that they have instead put their money into a Ponzi scheme.


Post-script for short-term traders:
Even if short-term trading horizons justify buying JPY against USD or other currencies (except EUR) to play momentum, a contrarian position is likely to be much more profitable at this juncture. This is in light of the fact that the downside to being short JPY (especially against USD) is substantially lowered by expected intervention. And the probability of intervention increases with JPY strength.
Posted by Shashank Khare at 16:56