The market expects Bernanke and his band to perform the Twist. Even as economic data has deteriorated, Pavlovian buyers have lifted stocks and treasuries in anticipation of central bank largesse. However is the Fed going to play the tune that the market wants to hear?

Growth requires fiscal policy to be stimulatory. When private and household sector is deleveraging and unwilling to invest, government must take up the slack. The basic macroeconomic identity: Y = C + I + G + X implies that when consumption (C), investment (I) are decreasing in an economy with a trade deficit (negative X) then government spending (G) must increase to keep national income (Y) from falling. Monetary policy can help if it is able to impact investment spending through lower rates. However, investment spending depends on a whole host of factors apart from interest rates. Sometimes these factors overwhelm the effect of lower rates making monetary policy impotent to restart growth. Unfortunately prevailing economic dogma scarcely recognises such liquidity traps.

It is in such a liquidity trap that US, and [1] have resorted to thoroughly dogmatic “unconventional” policy response. Beyond protecting the interests of the elite, monetary policy has only demonstrated its ineffectiveness. This has become even more apparent with time and increasingly led to the dogma being questioned.

It is only which has nailed itself to the mast of defunct economics. In indebted , calls for fiscal stimulus have grown louder as the experiment in austerity fails[2]. In the , Bernanke put emphasis on fiscal policy for continued recovery. To quote from his Congressional testimony (emphasis mine):
“Another factor likely to weigh on the recovery is the drag being exerted by fiscal policy...real spending by state and local governments has continued to decline. Real federal government spending has also declined, on net, since the third quarter of last year…The economy's performance over the medium and longer term also will depend importantly on the course of fiscal policy…Even as fiscal policymakers address the urgent issue of fiscal sustainability, a second objective should be to avoid unnecessarily impeding the current economic recovery. Indeed, a severe tightening of fiscal policy at the beginning of next year that is built into current law--the so-called fiscal cliff--would, if allowed to occur, pose a significant threat to the recovery.” If the “fiscal cliff” is allowed to occur then the would follow into a recessionary abyss. Bernanke clearly does not want this to happen. The FOMC meeting on June 19-20 gives him the opportunity to try and avert this disaster.

It requires the Orwellian feedback loop between economic data, market response and policy to be broken. As shown below, this loop has meant that bad is good and good is bad. 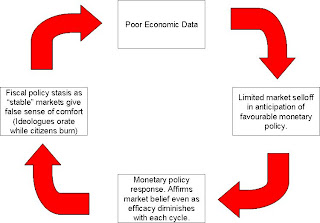 This means that stable and rising markets lead to policy stasis. Lack of a crisis encourages policymakers to indulge in partisan ideological fights. A prime example is the failure to pass TARP the first time. The ensuing market meltdown quickly concentrated minds and led to its eventual passage.

Currently market expectations are running high for Bernanke to deliver especially in light of the turmoil in . If Bernanke disappoints, he’ll cause a sell-off putting some pressure on Congress and Senate[3]. The timing is politically charged but the presidential election is not going to be decided on whether the S&P500 is at 1100 or 1400. The level of unemployment is a much bigger factor and it is unlikely to change dramatically, especially by November, through a display of monetary policy fireworks.

This is probably the last chance to avert fiscal suicide. The upside for Bernanke to cater to the market’s wishes is small and transient but the downside is huge. In contrast the upside of doing de minimis is potentially large while the downside can always be mitigated through action later if required. Therefore a gambling man would do nothing. Is Bernanke a gambling man? We'll know by Wednesday.

has the dubious distinction of overlaying the liquidity trap with several other tragedies largely of its own making.
[2] It is another matter that the calls to end austerity are loudest from self-serving politicians with a tenuous grasp of both reality and economics. See http://www.shashankkhare.com/2012/05/nonsensical-austerity.html
[3] This is not a novel approach. ECB's reticence is partly due to the need to put pressure on policymakers. More recently the Reserve Bank of India has turned on the heat on fiscal policymakers by keeping rates on hold to the market's surprise. See http://ftalphaville.ft.com/blog/2012/06/18/1048151/reserve-bank-of-india-were-holding-rates-you-sort-it-out/
Posted by Shashank Khare at 22:30