Another item has been added to life’s certainties of death and taxes. It is house price inflation. The sentence ‘It will never go down’ has been uttered in every single recent conversation on the subject. It is usually followed by ‘I should have bought earlier, now it’s unaffordable’. The oxymoron of perpetually rising prices and increasing unaffordability amongst the top income decile seems to escape notice.

The reason for an almost unshakeable faith that house prices will never go down is predicated on their observed behaviour. For the last 17 years, barring the credit-crisis induced meltdown, house prices have only gone up (Graph 1). Moreover, believers’ faith was further strengthened by the swift recovery from the crisis.

Graph 1: house prices have been going up for what seems to be a lifetime 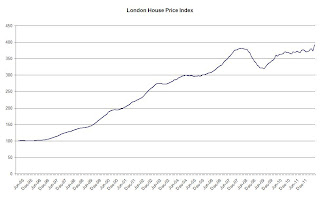 There are two main rationalisations for the belief in perpetually increasing house prices. The first is the argument of limited supply. The second is the argument of unlimited demand. Limited supply is an argument made in support of house prices for almost every city. It is especially valid for the capital of an island nation beset by stringent planning laws. However, prices are determined by both supply and demand. Even if the supply curve is completely inelastic, a fall in demand will lead to a fall in prices as Graph 2 simplistically shows.

Graph 2: Fall in demand shifts the demand curve to the left and reduces prices 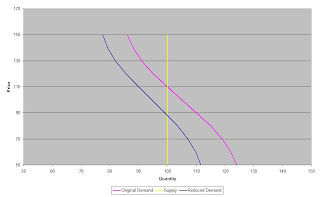 Believers dismiss such an eventuality by invoking the myth of unlimited demand. To them the demand curve, rather than shifting to the left (i.e. reduction in demand) is expected to shift to the right (i.e. increase in demand). Events seem to have borne them out as property’s ‘safe haven’ status has led wealthy individuals from across the globe to park a part of their wealth there. Once again the bias to extrapolate from recent history is apparent. However the ‘unlimited demand’ argument cannot be dismissed this easily. It requires further deconstruction.

Demand for property can be bifurcated into internal and external demand. The former is due to people employed and primarily resident in . It may be as a primary residence to live or as a buy-to-let investment. The latter is due to external residents buying property for investment, capital preservation or as holiday homes. Internal demand largely depends on demographics and performance of the economy. As long as jobs are plentiful, wages rising and population increasing, the internal demand for housing will rise. This has been the case since the mid-nineties.

has been a major beneficiary of the developed world’s move towards FIRE (Finance, Insurance, Real-Estate) economies. It contributed almost half of ’s gross value added (GVA) from finance and insurance sectors in 2009 and almost a fifth of GVA from real estate. The high and more rapidly increasing income from these sectors underpinned the high and rapidly increasing house prices (Graph 3). 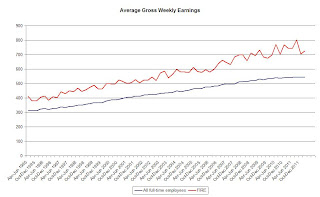 Source: ONS
Moreover these sectors generated a lot of jobs until the credit crisis (Graph 4) and also created ancillary employment in other sectors (Graph 5). A combination of job creation and a liberal immigration policy attracted immigrants enhancing the demand for housing for both purchase and rent. 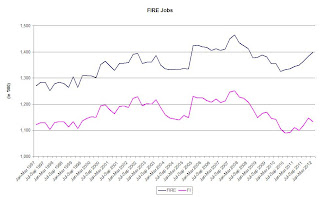 Graph 5: unemployment dropped faster but is now rising faster than 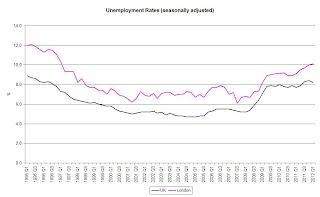 This natural demand was supercharged through access to easy credit apart from an influx of wealth from abroad. It led to house prices increasing at a faster pace than increasing employment and income would warrant (Graph 6). 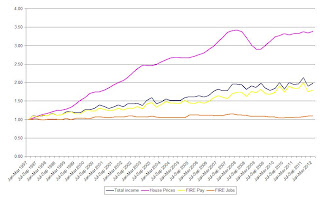 After the FIRE economy consumed itself in the conflagration of 2007-08 the dynamics of internal demand have changed. Cinders have fallen on all sectors as can be seen from the quickly rising unemployment which has increased more than the UK average (Graph 5). In FIRE sector employment is below the peak and as Graph 4 shows, jobs were again being destroyed in finance and insurance in the first quarter of 2012. Anecdotally the second quarter is going to affirm this trend. Real-estate’s bucking the trend may be due to temporary factors such as the Olympics. Moreover in finance and insurance stricter regulation and increased market volatility have reduced revenue and return for institutions. This has resulted in employee pay trending down (Graph 3). If this was not enough, politicians have decided to cater to populist xenophobia by cracking down on immigration. Employers and skilled migrants, already deterred by poor economic conditions, are further put off by the official hostility against immigration.

All the conditions responsible for a rising internal demand for housing are now acting in reverse. In addition, the rocket fuel of easy credit has burnt out with banks tightening lending criteria (Graph 7). Despite demand from households, credit availability remains moribund, application approvals are decreasing and mortgage interest costs are rising. Although data for is not exclusively available, given the arguments above, it is unlikely that banks are acting differently for Londoners. Especially in light of the fact that despite high average incomes in , price to income ratios are highest there (Graph 8). This implies banks either need to offer higher loan-to-income mortgages to Londoners or ask for higher deposits. And as graph 6 shows, loan-to-income ratios are being reduced across the UK.

Graph 7: Conditions for secured lending by households across 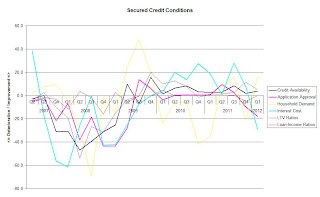 Source: Bank of
Graph 8: house prices are the most overvalued compared to earnings 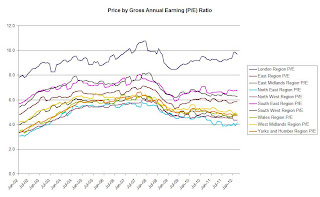 Even as internal demand started collapsing after the advent of the credit crisis, external demand underpinned the market and reflated house prices. This was despite external demand being much lower. The reason why a decrease in demand did not lead to lower prices was because of diminished supply (explained simplistically in Graph 9). Bank of England’s rate cuts reduced the pressure on homeowners to sell by lowering their repayments dramatically. The massive reduction in the number of transactions (Graph 10) along with anecdotal evidence supports this conclusion. 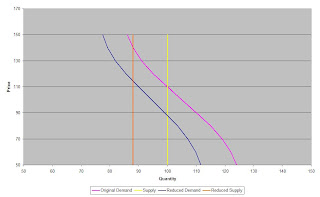 Graph 10: Completed transactions in are at the lows 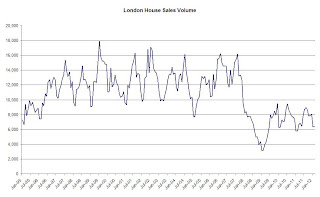 The additional external demand keeping the market alive has been due to ’s status as a ‘safe haven’. ’s location, cosmopolitan character and British rule of law and property rights have traditionally attracted wealthy investors. Recently, investors fleeing from the European debt crisis have caused another burst of demand.

However as the history of sovereign debt crises shows, external demand for a country’s assets is fickle and can turn in an instant. Houses may not be as easy to sell as debt and equity but investor sentiment is the same. In fact, due to the illiquid nature of the asset, prices can fall more dramatically. As long as property can preserve capital and provide returns it will sustain foreign money inflows. But in the absence of internal demand these flows become Ponzi like. The pool of foreign investors needs to be constantly replenished to enable existing investors to cash out at a profit. This causes prices to become dependent on perceptions of the economy and performance of the Pound Sterling.

Unfortunately the economy is not doing too well. The outlook is not too bright either given the policy mix. Not only is fiscal austerity combined with monetary debauchery going to fail but it is also exactly opposite to investors’ interests. The former will snuff growth and hence internal demand while the latter will cause a fall in the currency. Once attention shifts from the beleaguered European Union, investors will notice an island nation with a debt-burden[1] next only to peripheral (Graph 11). Since defaulting will be politically unpalatable and the strain of repayment socially and economically impossible, fall in the value of is virtually certain over the long term. Moreover the will suffer enormously from an implosion of its largest trading partner, the Eurozone. In such an event, it is a safe haven only in a relative sense – maybe the loss will be only 70% compared to 90% in Europe.

Graph 11: High debt-burden without the benefit of a reserve currency 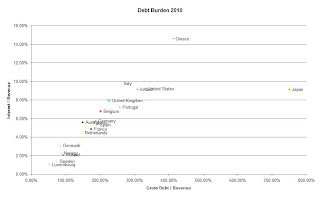 In conclusion, the analysis above lays bare the myth of permanently increasing house prices. A broader look at history shows that even if supply is limited, periods of seemingly insatiable demand and rising house prices do not persist forever. Data of house prices from another former colonial and European power makes this clear (Graph 12). The only sure things still remain death and taxes. 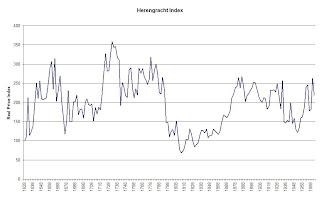