Central banks across the developed world are boldly going where no monetary policymaker has gone before. Apart from generating acronyms they have also generated raucous debate between the inflationistas and the deflationistas. The former believe is around the corner while the latter fear contracting the Japanese malaise. Trapped in between are investors, one day joyously contemplating recovery and fearful of inflation. The next day depressed about lack of growth and buying every safe haven bond in sight to escape Eurmageddon.

In this extreme Risk On/Risk Off volatile market there are two ways to trade/invest. The first is the Warren Buffett way. Do the analysis, form an opinion, put on the position and have the conviction to see it through over the long term. This requires an enormous amount of self discipline when portfolio NAVs are updated every second and each day generates a mountain of conflicting opinion and data.

The second way is hunt for assets and trades which provide a reasonable return over a broad range of future scenarios. Such opportunities largely obviate the need for the investor to decide which school of thought is going to be proved right. However, this is not a free lunch as extreme events can cause return expectations to be belied.

In the inflation vs deflation argument, one trade which works in both scenarios is shorting 5Y TIPS (Treasury Inflation Protected Securities) and buying duration adjusted notional of 30Y TIPS. The table below outlines the trade.

The inflationistas along with safe-haven buyers have pushed the current 5Y TIPS to an incredible negative yield of 1.13%. In contrast, current 30Y TIPS yields 0.67%. The yield differential is at the wides as Graph 1 shows. 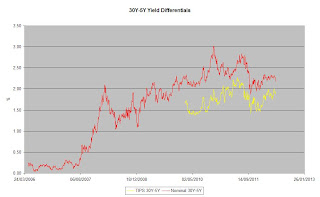 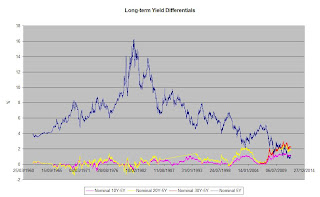 However this trade is not a blind reversion to mean play. In the event of higher inflation the yield curve is likely to bear flatten (i.e. yields will move higher with the short-end tenors moving more). Given the limited yield history of TIPS, it is not possible to check the relationship between real interest rates (given by TIPS yield) and nominal rates but the expectation is that real rates are positively correlated with nominal rates. The justification is that lenders are likely to demand a higher real compensation for loaning money in an inflationary environment. This is due to the uncertainty inherent in measuring inflation expectations and the tendency of inflation to accelerate upwards. This behaviour is evident for the short time period in which data is available (Graph 3). Therefore, even though 30Y TIPS yield will increase (and consequently the price will decrease), 5Y TIPS yield will increase much more and is very unlikely to remain at current negative levels. A duration matched long-short position in 30Y-5Y will provide handsome gains in such a scenario. In addition, as inflation expectations become unanchored and move higher investors are likely to pay a premium for long term capital protection. Therefore 30Y TIPS should outperform 5Y TIPS. 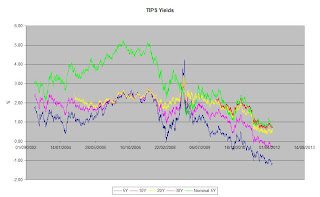 In case the deflationistas win the argument then the deflation floor in TIPS means that 30Y TIPS will outperform 5Y TIPS. Since TIPS pay the higher of inflation-adjusted principal or par at maturity, any negative inflation prints will lead to capital losses in 5Y TIPS (as the yield is negative and below coupon) but not in 30Y TIPS. Capital loss would be greater in an off-the-run bond which has a larger inflation accrued principal due to a longer period of time elapsing since issuance. So investors who put more weight on a deflationary outcome may choose to short an off-the-run 5Y. Moreover, a deflationary economy will cause the Fed to stay on hold and indulge in more QE leading to a grab for yield. 30Y TIPS yield should fall (and price rise) in such a scenario.

The trade provides a reasonable return even in a third scenario where the current muddling through continues for some time. As maturity approaches, 5Y TIPS yield has to rise to 0% leading to a capital appreciation on the short position. In the meantime, 30Y TIPS should fluctuate around similar levels while paying a coupon of 0.75% to the holder.

Although the trade is likely to work well in a broad range of scenarios, tail events will cause losses. The three main tail events are very high inflation, heightened credit risk and collateral crunch following a flight to safety. Very high inflation can cause a loss of confidence in Treasuries in general and lead to higher loss on the 30Y leg. If political gridlock starts impacting economic efficiency and competitiveness apart from raising credit risk, investors may cut longer term exposure to the . This will again cause greater loss on the 30Y TIPS position. Finally, a chaotic collapse of the Eurozone will cause a desperate flight to safety along with a massive collateral crunch. This is likely to be focused on the short-end causing losses on the 5Y TIPS short position.

However, tail events should not impact the main investment strategy since a part of the portfolio is allocated to purchasing insurance against them. Unless the investor considers tail events as the central scenario, the 30Y-5Y TIPS long-short trade seems to provide a reasonable return for the risk.

NB: I have deliberately not provided any targets for final yield differentials. Prices and yields are path dependent and hence price/yield targets assume omniscience on part of the author. To this I can lay no claim.

Disclaimer: This is not an investment recommendation. It is merely an idea and the reader should perform his/her own analysis before making any investments.
Posted by Shashank Khare at 20:10