The NIFTY has broken lower (Graph 1). And the INR is in free fall (Graph 2). As I've said before, this is all about politics. The economic fundamentals aren't dire but the current government is lurching from scandal to reform rollback and back to scandal. The biggest concern is the current account deficit which isn't being helped by high oil prices and rupee depreciation. India imports about 70% of its oil consumption and Brent in INR is back to it's highest ever level (Graph 3). But because of a weak government supported by populists, the rise is going to swell the subsidy bill worsening government finances. There is apparently a brain-dead suggestion about dual pricing of fuel. The last time such a brand of politics was practiced it gave India the Hindu rate of growth of 2-3%. Sell in May applies. 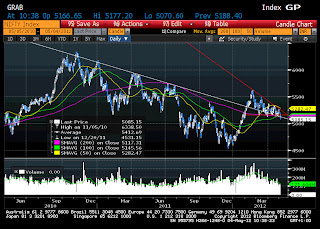 Graph 2: INR at its lows

Graph 3: Oil price shock to a government which has lost the ability to shock