Euro: Even the resilient fall eventually

Shorting the Euro has been the masochistic trade of the year. In spite of the Eurozone hurtling towards event horizon, Euro is roughly unchanged against the US Dollar since the beginning of 2011 (Graph 1). The usual explanation touted for this extraordinary resilience is Bernanke’s commitment to debauch the dollar to defend his PhD thesis.

Graph 1
This is only a partial explanation at best. The ECB has also expanded its balance sheet, even if it isn’t as much as the Fed. More importantly, it has expanded it through lower quality assets – eg. Spanish home loan ABS vs US Treasuries and US MBS. Therefore if the exchange rate was solely dependent on currency debauchery then Draghi’s LTROs would have succeeded against Bernanke’s QEs in depreciating the Euro.[1] To know why so many smart people have thrown in the towel on the Euro short trade we have to go back to basic macroeconomics.

The Balance of Payments (BoP) identity is:

Standard macroeconomics assumes BoP to be equal to zero. This has to hold in the long term but in the short-term non-zero BoP adds or subtracts from a nation’s reserves (foreign exchange mainly). As an example if in a given year, a country is a net importer with no foreign capital inflows then it will deplete its reserves. This imbalance can only occur as long as there are reserves. Once reserves are exhausted then either imports stop to balance BoP or foreign capital flows in to finance the imports.

Since exporters, importers, foreign and domestic owners of capital are not coordinating with each other how does BoP balance? This is where national currency’s exchange rate (FX rate) comes into the picture. To simplify, a nation can either have a floating market-determined exchange rate or a fixed officially-mandated exchange rate.

In the case of the floating rate, a BoP imbalance is adjusted through the FX rate. Going back to the earlier example, a current account deficit unmatched by a capital account surplus will not only lead to reserve depletion but also depreciation of the nation’s currency. This would have the following consequences:
Therefore FX depreciation acts as a self correcting mechanism to balance BoP.

In a fixed rate regime, BoP imbalance is borne by reserves. Official policy attempts to manage reserves by either devaluing the currency in case of a BoP deficit or by official investments abroad to create a capital account deficit (revaluation is rare).

Now coming back to the Eurozone and looking at it as a single entity, the lack of Euro depreciation makes sense. Current account deficit for the block is close to zero with the average of the last two years being -0.43% of GDP (Graph 2). The capital account is also close to zero (Graph 3). Therefore there is no fundamental reason for the FX rate to appreciate or depreciate significantly. This is also consistent with what has been observed.

However, the Eurozone is neither a monolithic block nor a sovereign nation. Within the Eurozone each country operates as if under a fixed exchange rate regime with pooled foreign exchange reserves. A net importer’s central bank can obtain foreign currency from a net exporter’s central bank through the ECB. As long as the overall Eurozone current account balances, there is no need for balancing at the individual country level. Therefore German surpluses and peripheral deficits can continue ad infinitum. This ex-Eurozone foreign trade is similar to different areas within a country and is not of much interest.

Due to the lack of fiscal union, the interesting part is that for intra-Eurozone transactions each country operates as if it has infinite reserves. Monetary union assures a country with intra-Eurozone current and capital account deficits that it can operate without fear of running out of reserves. This is a function of the esoteric TARGET2 (Trans-European Automated Real time Gross settlement Express Transfer system) balances. The deficit nation incurs TARGET2 liabilities, i.e. its central bank gives an IOU to the surplus nation’s central bank for the imported goods/capital transfer. The simplified schematic below gives a concrete example. 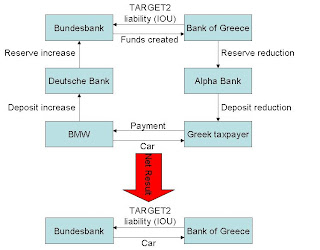 The problem arises when the capital account is in balance or deficit. Theoretically, TARGET2 liabilities can keep piling up until the deficit nation runs out of collateral for these IOUs. But this can never happen because of two reasons. The first is that collateral acceptability is largely decided by the deficit nation’s central bank within given guidelines. The second is that the central bank’s power to provide ELA (Emergency Liquidity Assistance) against any collateral it deems fit. Even Plato’s guardians would find it difficult not to succumb to this moral hazard if the republic was in danger.

Applying this theoretical edifice to observed reality makes Euro’s resilience understandable. It also explains German discomfiture with widening collateral criteria since their TARGET2 assets become secured on lower quality assets (if they can be called secured at all). Moreover, it explains what is in store.

Peripheral current accounts with the exception of are all in deficit and have been for the last decade. Until the start of the sovereign debt crisis these deficits had been financed by the private sector of Northern European states and the rest of the world. This was the convergence trade which culminated in Greek CDS trading at less than 20bps (0.2%) differential to German CDS in 2006. However with the onset of the crisis, private capital flows started reversing. Now even domestic capital is stampeding out as can be seen from the reduction in bank deposits. Private capital been replaced by official TARGET2 liabilities as the means to finance current account deficits. Because capital flight has been largely contained within the Eurozone (out of peripherals into ) it has not impacted the Euro exchange rate. But at some point this will change.

Two alternative scenarios can occur in future (see diagram below). The first is an internal wealth transfer which sees TARGET2 liabilities torn up. This can take place through various mechanisms and would be equivalent to a fiscal transfer from northern to the peripherals. It would be largely FX neutral. The second is capital flight out of the Eurozone as people realise that German, and northern European, strength is superficial. According to JP Morgan half of ’s net investment abroad is its TARGET2 assets. A Greek exit would render €111bn of TARGET2 assets with northern European central banks worthless. As Jean Paul Getty shrewdly observed, fall of debtors leads to a fall of their main creditors as well. 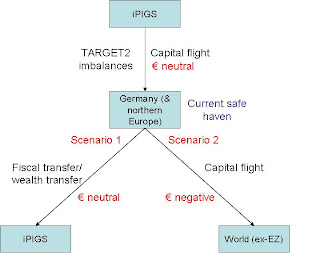 The second scenario will lead to a free fall of the Euro and is looking likelier of the two due to political mismanagement and brinkmanship.

[1] The 1% interest rate differential is not worthy of consideration. The volatility adjusted return is laughable for any serious investor/trader.