Differing treatment of creditors to Greece sets a precedent despite repeated attempts to portray it as a "special case". This means Eurozone peripheral sovereign debt is no longer pari-passu. The tranching and differing seniorities have been made explicit. The slide below shows who's at risk in Portuguese debt. Depending on the targeted debt/GDP ratio in case of a "voluntary" restructuring, bondholders can expect a 36%-63% haircut on notional (this reduces by 3% in case ECB donates its SMP profits on PGB to charity as it has done in Greece). 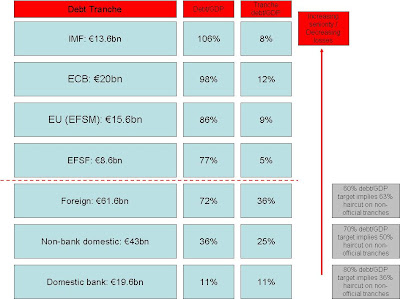