In defence of the German point of view

The G-20 has told that it is on its own. And the poor Germans find themselves in the unenviable position of being made the scapegoat. European solidarity and panicked governments demand that the rich nation of lend some money to poorer cousins down south. This is the equivalent of an industrious rich man being accosted on the street and forced to hand over his money to poor people while bystanders nod in approval and relief at a “fair” and “charitable” distribution of someone else’s wealth.

Real life is mirroring the much emailed joke on the fable of the ant and the grasshopper. In the twisted joke, the grasshopper screams, cries and gathers a band of followers to justify sharing the ant’s food hoard during winter after spending the summer singing and dancing. A look at the graph below shows which nations were singing and dancing and which ones were hoarding away food for the harsh winter. From 2003 to 2008, German workers were taking real wage cuts while the rest were celebrating their economies having reached a permanently high plateau. 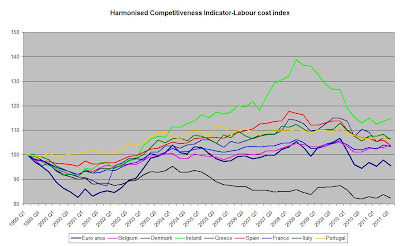 During the same time, the German government improved its finances by cutting the deficit to almost zero in 2008. The salubrious economic environment certainly helped as can be seen by the reduction in Euro-area deficits. However, German outperformance was the result of prudent macroeconomic policy. Fiscal policy pursued was closer to true Keynesianism; save during expansions to spend in recessions. In stark contrast, the only other nations to record a surplus were and where housing manias deceptively flattered government revenue and engendered complacency. 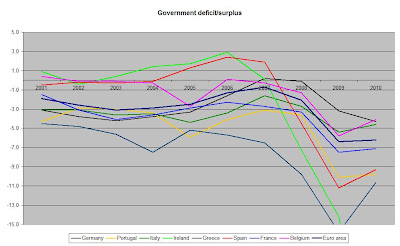 If thrifty and prudent behaviour were the only cause of German antipathy to bailouts then there might be grounds for criticism. After all it would be very hard hearted of the ant to not help at all and instead deliver an ‘I told you so’ lecture to the grasshopper. However, in this case economic righteousness is mixed with moral indignation.

A look at Transparency International’s Corruption Perceptions Index makes it clear why the Germans are baulking at signing blank cheques despite Timothy “Bailout” Geithner’s pleas. ranks 14th in the world and 4th in the Euro-area (after , and ). In comparison, the peripheral economies rank much lower (none in the top 10-percentile) with and being notable laggards (table below).
(Source:Transparency International Corruption Perceptions Index 2011)

German anger is engendered from a mix of moral and economic righteousness. The moral issue of corruption and tax evasion is superimposed on the economic issue of entitlements in these structurally rigid economies. Adding to this resentment is the fact that has bankrolled the gravy train for a long time. EU budget figures for 2010 illustrate this point aptly. 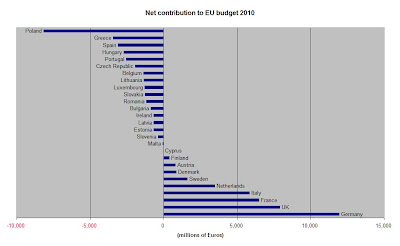 Not only did the grasshopper not gather any food itself, but against the ant’s advice it also frittered away what the ant gave it. Now in peak winter it wants the ant to unconditionally share some of the remaining food while only half-heartedly promising to reform its frivolous ways. If this is not just cause for anger then one does not know what is.

However, outrage and anger have no part in policy formulation. The insistence on austerity is born from anger and is completely counterproductive. Help must be given in a manner which avoids both extremes of high-handedness and unconditionality. Unfortunately the current approach manages the amazing feat of being high-handed and unconditional at the same time. Intrusive monitoring and usurpation of sovereign powers is high-handed and likely to engender a reaction against the union in member states. Indeed, such a reaction is well under way in . Simultaneously, providing money on the basis of random economic predictions and opening the central bank vault wide open makes transfers unconditional. It not only fails to solve the problem but increases the severity of the next outbreak because of moral hazard and reduced pressure to reform. This increasing severity can be seen in the exponential increase in estimated bailout funds required since the onset of the sovereign debt crisis – from €20bn to solve the Greek problem in 2010 to €1trn not being enough now.

The solution is to restructuredebt aggressively in all problem economies, pursue structural reform andprovide money to help the transition. This is better than the current practice of massaged figures which generate impressively precise estimates (120.5% debt-GDP for instance) from exceedingly imprecise guesses of an economy’s path eight years in the future. Then proclamations are made about these estimates being achievable and sustainable which not just stretch but create a wormhole in the fabric of credulity. This is finally followed by throwing more good money at a hopeless situation under the fig leaf of conditionality which everyone knows will never be met in practice.

The justifiably angry ant is in a position of considerable power. It can either use this power wisely to save and reform the grasshopper to earn its gratitude. Or it can slam the door on the grasshopper’s face and set it the impossible task of searching for food in the harsh winter.
Posted by Shashank Khare at 18:32