“Never believe anything until it is officially denied.” – Rt. Hon. James Hacker[1]

Hacker has been proved right time and again during this crisis. Now as Greek talks flounder, the market’s attention has turned to . Just as was forced to follow into the arms of the IMF in 2011, it is now being forced into a restructuring[2]. Once the debt spiral begins, denials and counterarguments follow a familiar pattern as illustrated below. 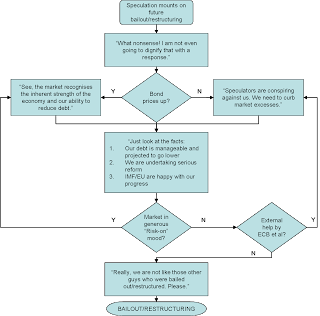 To determine whether the end is near or not, one needs to analyse the facts. Market prices of bonds have lost all significance as an indicator due to an illiquid and dysfunctional market. On fundamentals, optimists cite ’s progress against IMF targets as proof that it is not going to follow . Not only is it implementing the IMF/EU programme successfully but it also has a much lower debt/GDP. Moreover, it has a majority elected government under Coelho which is committed to reform. This is in sharp contrast to the political gridlock in or even the unelected cabinet in .

On surface, these are credible arguments. However, as with all distressed assets, the difference between investor's dream and disaster is decided by the detail. The much touted success on achieving deficit targets in 2011 was due to a one-off €6bn transfer from bank pension schemes to the social security system[3]. Without it the deficit would have been around 10% of GDP (not far off from the 2011 Greek deficit forecast of 9.1 – 9.4%). The IMF mandated deficit target for 2012 is an overly ambitious 4.5%. This implies a 5.5% reduction in deficit even as the IMF forecasts a 3% economic contraction with “risks skewed to the downside”. These strongly echo the impossibly optimistic Greek targets which reality kept revising. missed its IMF deficit target by 1% in 2010 and about 2% in 2011. IMF expected the Greek economy to contract by 4% in 2010[4] and 3% in 2011[5]. Instead it contracted by 4.5% and 6% respectively. Usually deficit reduction is easiest in the first year as grossly inefficient and wasteful spending can be cut immediately. In addition, one-off transactions can flatter the figures. However, as has demonstrated, continuing structural improvement through battling vested interests is much more difficult. And if it has to be done in a debt-deflationary environment where growth is falling off a cliff, then it is impossible. has achieved the easy part but now it is facing the impossible with regard to deficit cutting.

The second point that the optimists make is that ’s debt/GDP ratio is much lower than . At 105% of GDP it is even lower than ’s. However, it is still a gigantic 70% higher than the 35% which Reinhart & Rogoff define as a sustainable level[6] (and is 45% higher than the criterion). This ratio is increasing as deficits increase the numerator and economic contraction decreases the denominator.

The final argument in defence of Portuguese debt sustainability is based upon political stability. A recently elected majority government which is committed to reform is expected to reverse the worsening debt dynamic. This misses two important factors.

The first is the structure of the Portuguese economy. It is closer to developing countries than to developed ones. The main industries are low value added ones such as textiles, footwear, wood, paper manufacturing. Competition from and other low labour cost economies is intense. This resulted in the decade long stagnation of the Portuguese economy even before the crisis. In addition, demand from ’s main export partner, , has been impacted by the real estate crash there. But what really bodes ill for the future is the relative lack of highly educated workforce as shown in the graphs below.
Figure 1: Proportion of population aged 30-34 having atertiary educational attainment 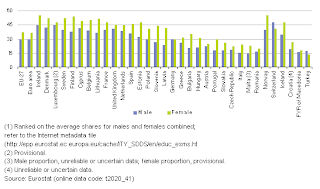 Figure 2: Distribution of population aged 25-64 by highestlevel of education, 2010

Source: European Centre for the Development of Vocational Training

Lack of skilled workforce and an economy being structurally outcompeted due to globalisation preclude an Irish style turnaround in growth.

The second important factor is the Euro. Currency depreciation to restore competitiveness is impossible. Therefore the entire brunt has to be borne by the population through real wage reduction. Even if Coelho can survive the wave of unpopularity that this invariably produces, the economy’s structural problem will eventually ground him.

Thus no amount of leadership or popular mandate can turn the Portuguese economy around in time. It is only a question of how much time can EU/ECB/IMF buy. Here the parallels with break down. Being the first mover, enjoyed EU and creditor patience through the last two years of protracted negotiations. Now that patience has run out. Unless the Greek credit event is as appallingly mishandled as (and others) are likely to rapidly follow the Greek precedent.


[1] Those unfamiliar with the great man should watch: http://www.amazon.co.uk/Complete-Yes-Minister-Collectors-Boxset/dp/B0002XOZRO
[2] This blog’s policy is to avoid euphemisms to maintain clarity. A restructuring by the following names is still a restructuring and stinks just as much: “voluntary rollover”; “debt sustainability exercise”, “Private sector initiative”
[3] They literally robbed the bank
[4] May 2010 estimate which substantially revised the EC estimate of -0.3% growth made in late 2009
[5] December 2010 estimate
[6] The exact definition of the limit is based on external debt/GNP but approximating to debt/GDP will not change the thesis much
Posted by Shashank Khare at 23:32