This is something I wrote before the EU summit meeting of 21st July for a private discussion. I thought I'd share it as the Greek drama continues to enthrall markets.


Overview of trade strategy for the European crisis


The dream of European integration lies in tatters as the original sin of a pure monetary union without a fiscal union has been compounded by a series of policy errors. This has allowed the bond market vigilantes to reach the gates of after the sack of , and . However the air of inevitability that hangs heavy over at the moment can dangerously cloud trading judgement. Even if the eventual outcome is correctly envisaged at outset, path dependent price moves can wreck a portfolio. Also, the interconnectedness of variables and massive volatility generated by the crisis considerably worsens risk-reward of tactical trading based on a partial view. Therefore, trading in this environment requires not only knowledge of the destination but also an awareness of the path. Sun Tzu’s maxim encapsulates it best: “Strategy without tactics is the slowest road to victory. Tactics without strategy is the noise before defeat.”


At this juncture, it is the fate of which will determine how the crisis proceeds.  The flow chart below lays out a broad overview of the plausible paths. 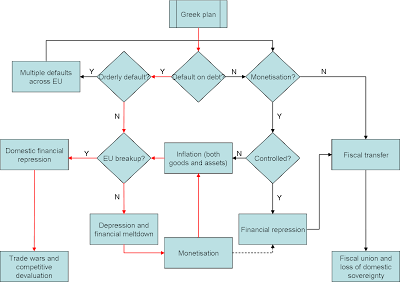 The likely path (in red) at this point in time appears to be a default[1] through a combination of bond buybacks and forced “voluntary” exchanges. The Greek template will then be assumed to apply to the other sovereigns in trouble, viz. and in the first instance and and after. This is the reason for the current bout of peripheral weakness as market participants engage in a desperate and ultimately futile attempt to reduce exposure. With core country voter opposition to further bailouts and political deadlock, the onus will be on the ECB to calm markets until a credible plan can be developed. Bundesbank capture of ECB ensures that a timely and forceful intervention in the form of monetisation along with a reversal of the tightening cycle[2] shall not be forthcoming. Contagion and disorderly defaults will take the EU to the brink of breakup. However ’s political elite will be helped by inertia and initial lack of overwhelming support for secession, in keeping the union together. At this point, ECB will have to abandon dogma and monetise to deal with economic and financial collapse wrought by sovereign defaults and mass bank failures. There is a risk that monetisation leads to inflation and complete loss of confidence in the Euro. This would severely test political will for the union as voters, especially in the periphery, tire of a recessionary existence. At that point in time, unless there is a change from the current dismal political leadership, a breakup into more homogenous groups or individual sovereigns is likely. Such a cataclysmic event would generate considerable antipathy between EU members and require exiting members to financially repress their economies to provide stability. Attempts at economic growth will lead to trade wars and competitive devaluations.


Enlightened political leadership along with financial repression and coercion can stabilise the situation preventing a breakup. And ultimately a fiscal union can take place with members facing a significant loss of financial autonomy. However, this is a lower probability outcome.


Wheels within wheels and reflexivity


The chart above is a helpful overview and each step can be magnified to create a similar chart. Also it is not static but changes with time. This is because feedback loops operate between economics, markets and politics where a change in one feeds through to the others and their responses generate another change.


European leaders are working under the assumption that they have until September to work out a solution for . This has caused uncertainty and fear in markets and led to spread widening. Over time, the toxic effect of austerity, rate rises and credit contraction in peripheral economies will be further revealed in economic data releases[3]. As budget deficits remain untamed, calls for further austerity and a halt to further aid will be made in core countries. Both will serve to enhance the market’s fears. At a certain spread and market dysfunction level, politicians will be forced into knee-jerk reactions such as placing restrictions on short-sellers of bonds and curbing CDS activity. This will exacerbate the problem and may lead to auction failures as participants shy away from European (Italian and Spanish) government bonds. With refinancing interrupted the question of default and monetisation will have to be immediately addressed.
As an example, the first arrow of the flowchart can be expanded as below. 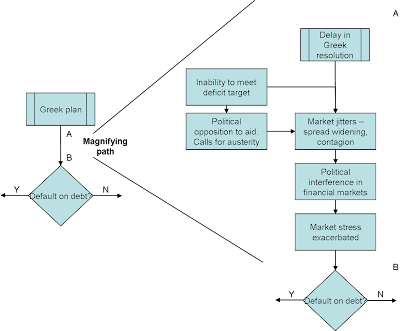 Eurozone is not enough
In a market operating on “risk on/off” with cross-asset correlations at the highs, analysing Eurozone dynamics is not enough. Other systemic risk factors need to be considered such as:
Detailed discussion on these is beyond the scope of this paper.

Putting it all together

Given the likely scenario is of disorderly defaults across the periphery followed by monetisation, a broad strategy of being short EUR, short bonds and long CDS suggests itself. Using Table 1 (appendix) and idiosyncratic factors, this can be refined to provide a broad trading view for each sovereign. This is given in table below.

[1] For ease of use, “default” shall refer to all scenarios which lead to a loss for the bondholder compared to the cash-flows envisaged at the time of bond issue. Therefore cases of restructuring such as maturity extension, coupon reduction are also labelled as default. Additionally, bond buybacks below par are included as they represent a loss to the bondholder even if it has already been taken by marking to market.
[2] Raising rates is a repeat of the policy mistake made in 2008 and likely to have worse consequences
[3] This is clearly seen in where unemployment has been consistently rising and government revenue falling
Posted by Shashank Khare at 12:48 No comments: